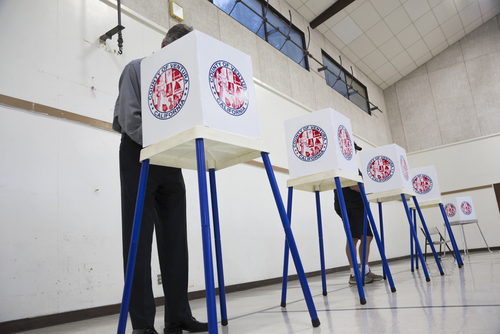 County Registrar-Recorder Dean Logan envisions a future system in which, instead of being directed to designated polling stations on a single Tuesday, voters will be able to choose from hundreds of voting centers around the county during a 10-day window leading up to election day.

The county began exploring a redesign of the system in 2009. In 2014, the county Board of Supervisors approved a $15-million contract with the Bay Area design firm IDEO. The planning and design process has cost $14 million to date, Logan said.

Elections officials unveiled the completed prototype of the new voting machines Thursday. The devices were the product of dozens of earlier prototypes and feedback from more than 3,500 voters, designers said.

“We really took a step back and tried to take a holistic view to understand wishes, desires, pain points in the voting system today,” said IDEO executive program director Annetta Papadopoulos. “We focused on the diversity of voters that make up Los Angeles, people with all kinds of accessibility challenges, be it fine motor, visual, people with different native languages and different levels of literacy.”

Many voters complained of pain points in the system after the June 7 election. These included broken voting machines, voters whose names did not appear on rosters or appeared under the wrong party, and difficulty in obtaining “cross-over” ballots for independent voters who wanted to cast votes in the Democratic party presidential primary.

More than 250,000 voters had to cast provisional ballots, and the count of provisional and late vote-by-mail ballots has continued through this week.

Logan said had the new system been in place, “I would argue … it would have been a fundamentally different voting experience on June 7.”

With voters no longer confined to a single polling place, many of the issues with voter rosters that led to provisional ballots would not have occurred, he said. Voters wanting to cast a cross-over ballot could have selected the correct ballot through the system’s user interface.

“This is not just about equipment and technology,” he said. “It’s about the whole voting experience.”

Earlier touchscreen voting systems raised security concerns in some quarters, because the votes were transmitted electronically, in some cases without a paper record, leaving them potentially vulnerable to tampering by hackers.

David Dill, a computer science professor at Stanford who has been an outspoken critic of electronic voting systems, said the proposed Los Angeles County system does not pose the same security concerns because it will produce paper ballots that will be reviewed by the voters and can be audited later. The greater potential issues will be in the system’s usability, he said.

“In practical terms, the biggest problems are it’s difficult to design what is essentially a consumer device and get all the software and design details right,” Dill said. But if successful, he said, the new system could reduce the potential for voter error and make the process easier for people with special needs.

“Voting systems can be better, and particularly a place like Los Angeles has these special challenges that are not being met very well by the voting machine manufacturers,” he said.

If successful, the Los Angeles system could be picked up by other election offices looking to replace their aging fleets of voting machines.

“Election officials that we spoke to across the country told us they were watching that project,” said Christopher Famighetti, a voting rights researcher at the Brennan Center for Justice who co-authored a recent report on the dangers of aging voting equipment.

Los Angeles County officials are now formulating the bidding process that will select a manufacturer for the new machines. The devices will also need to undergo state testing before they can go into use.

Logan said his office is waiting for passage of state legislation that would set up the parameters for a new “vote center”-based system. The legislation would in part determine how many voting centers and machines would be required, which would dictate the project’s ultimate cost.

He hopes to roll out the new system on a limited basis for early voting in the 2018 election, and to convert completely by 2020.