The second-annual Civic and Gov Tech Showcase was a forum for 20 emerging companies, government programs and nonprofit endeavors, a networking event bringing together government workers and private-sector experts, and a rallying cry for Sacramento as a viable alternative to the Silicon Valley.
Sep 23, 2016 / By Matt Williams 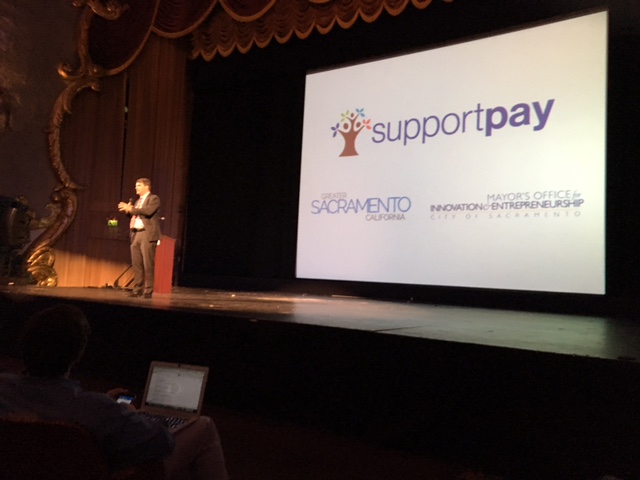 A pitch-fest for startups offering solutions to government brought big ideas and a good measure of enthusiasm to Sacramento on Thursday.

The second-annual Civic and Gov Tech Showcase, organized by nonprofit Innovate Your State and the Sacramento Mayor's Office for Innovation and Entrepreneurship, was a showcase for 20 emerging companies, government programs and nonprofit endeavors, a networking event bringing together government workers and private-sector experts, and a rallying cry for Sacramento as a viable alternative to the Silicon Valley.

The event at the downtown Crest Theater also featured an announcement. Sheri Atwood, CEO of SupportPay, an automated platform for child support payments, took the stage to discuss why she decided to move her company to Sacramento’s Cannery development from Santa Clara. Atwood said she was looking for a community with a diverse pool of tech talent, where her company could attain its goal of growing to 300 employees in the next three years.

Sacramento’s interim chief innovation officer, Abhi Nemani, said having so many like-minded companies and government agencies in one place on Thursday was “like Christmas” for civic technologists like him.

The theater’s lobby bustled with activity as entrepreneurs from near and far showed their products to the hundreds of people in attendance. Solutions there included Spotery, an Airbnb-style marketplace for municipal facilities; a phone app called Voter, described as “Tinder for politics"; and a host of others, such as ARGO Labs, CityGrows, MeWe or SuperPublic SF.

Presenters from government included the city of West Sacramento, the Los Angeles County Registrar’s Office and OpenJustice from the California Department of Justice.

Sacramento Mayor-Elect Darrell Steinberg told the audience that his city’s economic renaissance will continue and it must partner with the private sector to spur innovation and help government become more effective.

“I’m here to tell you that what has started here in Sacramento will continue and we will elevate it,” Steinberg said.

Tim Draper, the Silicon Valley entrepreneur who founded Innovate Your State, noted that the relationship is changing between government and startups.

“Now government is ripe for transformation, and now governments are all in competition for us,” Draper said.