Sacramento to Become a Testing Platform for Self-Driving Cars

At the beginning of just his second day on the job, Mayor Darrell Steinberg announced to members of state, local and the federal government a new coalition that is inviting all autonomous vehicle manufacturers to use a dedicated part of the city as an open source platform for all fully automated self-driving vehicles.
Dec 16, 2016 / By Ryan McCauley 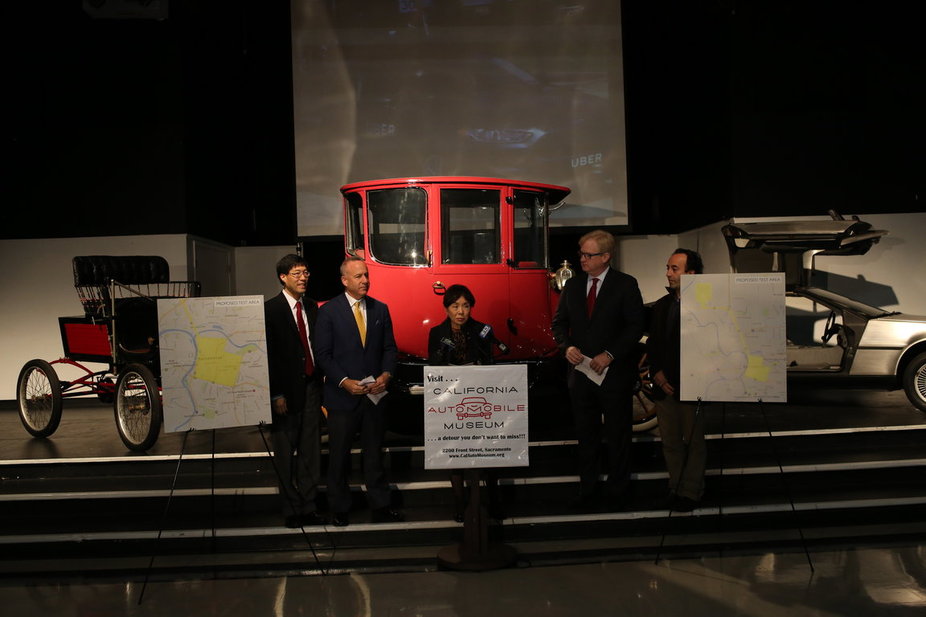 “Let’s go for it,” said Sacramento, Calif., Mayor Darrell Steinberg. “Let’s be on the cutting edge. Let's be the center of innovation around renewable energy, electric vehicles and autonomous vehicles.”

At the beginning of just his second day on the job, Steinberg announced to members of state, local and the federal government a new coalition that is inviting all autonomous vehicle manufacturers to use a dedicated part of the city as an open-sourced platform for all level 5 autonomous vehicles — full automation in which the car that can handle all driving tasks and go anywhere without human help. The coalition consists of Sacramento-area public figures and local businesses, and its sole mission is to bring AV manufacturers to the area.

“Historically, we have looked to other cities for best practices," Steinberg said. "No more. We can no longer be afraid to take risks, and we must create the best practices."

Citing the plan to transform the downtown area into a testing space for fully automated vehicles, Steinberg mentioned the city’s plans to make infrastructure smarter by adding in communication technologies.

Flanked onstage by a steam-powered locomotive and a DeLorean DMC-12 (a.k.a. the Back to the Future car sans flux capacitor), Steinberg declared that Sacramento will serve as a demonstration city for innovative technology. The project will be funded in part by $10 million Innovation and Growth Fund monies.

This move is not just about bringing fantastic technology to the city. “It’s about real people,” said Steinberg. “By testing here in Sacramento, we will be on the forefront of ensuring this technology will benefit everyday working people. … It's about the 85-year-old man getting to his dialysis appointment. It's about the working mother getting her kids to school on time.”

Creating equity through new technology developments is imperative to the state capital.

Steinberg, along with Congresswoman Doris Matsui and State Sen. Richard Pan, told automakers that Sacramento is ready to go. The city, Matsui said, is home to a “burgeoning innovation economy.” Not only does AV technology have the opportunity to benefit public safety, but it also can increase mobility for the elderly and disabled communities.

Citing her positions on the House Energy and Commerce Committee and Subcommittee on Communications & Technology, Matsui assured attendees that her federal colleagues will understand what Sacramento is doing. “We are ready," she said, "and we are able to take up the challenge."

Stating that nobody knows what will happen at the federal level when it comes to transportation, Matsui also assured attendees that Sacramento is united. By engaging all levels of the government, the city is committed to collaboration and possesses the political will necessary to help test and develop AV technology through public-private partnerships.

The test area would include highways and surface streets, the combination of which is crucial in testing level 5 autonomy.

For Pan, Sacramento is the perfect place to test autonomous vehicles. The city has a range of environments, it is not too big and not too small, and all levels of the government are on the same page. The city was recently chosen, along with 15 other cities and counties, by Sidewalk Labs and Transportation for America, to help tackle urban mobility challenges.

The city is looking to take advantage of its position and ties to both the state legislature and the DMV. Uber announced that it was deploying its driverless cars in San Francisco, and almost immediately was told to cease driverless operations by the state agency.

The Sacramento coalition is taking requests for parties interested in testing autonomous vehicles at sacav.org.

This story was originally published by Government Technology.