Tom Constantino will start in the new position of executive vice president and chief financial officer on June 12.
May 25, 2017 / By Kayla Nick-Kearney 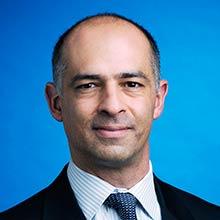 Tom Constantino was appointed the executive vice president and chief financial officer of A10 Networks — which creates applications networking solutions to secure data center applications and networks — on Friday, May 19, and will start in his new position on June 12.

Prior to his appointment, Constantino served as vice president and head of accounting and finance operations at Western Digital. He was responsible for a team that worked across eight countries and contributed to the company’s purchase of SanDisk. He also was chief financial officer of Western Digital’s Hitachi Global Storage Technologies subsidiary, and was responsible for financial planning and analysis on multiple acquisitions.

“His expertise in strategic financial planning and operations will be a solid asset to A10 as we continue to capitalize on new market opportunities while driving improved profitability," said Lee Chen, president of A10 Networks, in a press release.

He started his career at PricewaterhouseCoopers and spent 16 years working for Hewlett-Packard. Before moving over to Western Digital, Constantino worked as vice president of corporate finance at Hitachi Global Storage Technologies.