Vitals Aware Services, which contracts with the Folsom Police Department and more than 70 other public safety agencies and school districts in five states, is announcing a new partnership Wednesday with other law enforcement agencies and schools in the Sacramento area,
Feb 10 / By John Frith 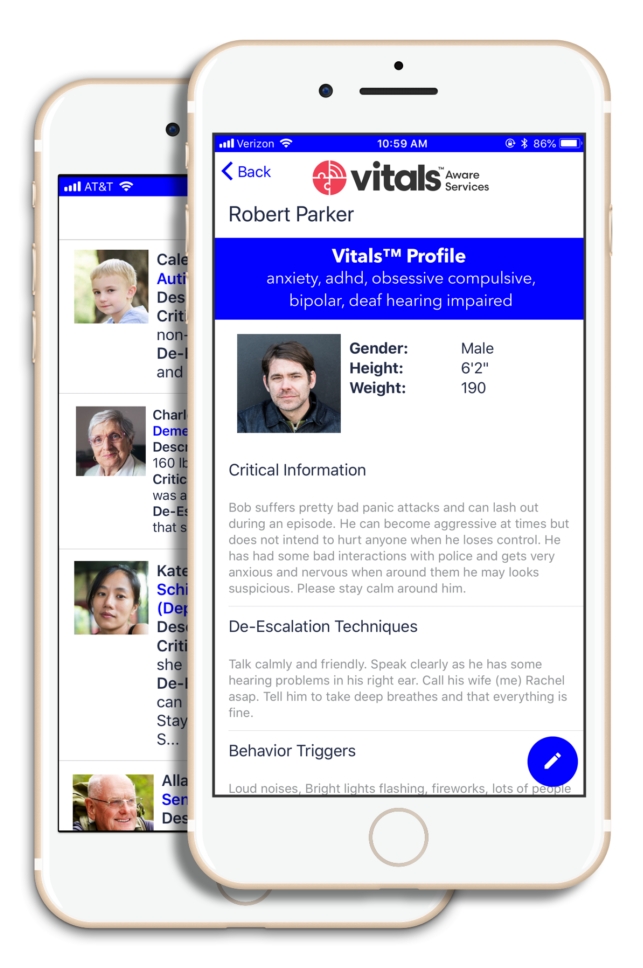 A program that was launched last month in Folsom to warn first responders that they are nearing a person with autism, dementia or other conditions — and provide information about how to best work with the individual — is set to expand this week.

The expansion is part of the company’s effort to provide services beyond its home base in Minnesota and its core constituency of law enforcement and medics. The company plans to work more closely with school districts, care facilities, senior living centers and other organizations that serve individuals who have problems communicating.

“We started with a pilot program in 2017 with one police department and have been expanding since,” Alleyne told Techwire. “We’ve spent a lot of time in Minnesota, and 2019 marked the beginning of our national launch. We expanded into Massachusetts and North Carolina, and think we can run a lot faster in 2020.”

To prevent the information from being used for other purposes, Alleyne said, the data disappears from the responder’s app after 12 hours, providing time to write reports. Because the information is provided by family members and isn’t retained, civil liberties groups have so far been accepting of the program, he added.

Elva Valasek, a senior dispatcher with the Folsom Police Department, is also a volunteer leader with the Sacramento chapter of Project Lifesaver, a nonprofit founded in 1998 to help family members electronically track loved ones with autism or other disabilities. She learned about Vitals at a conference in Orlando in August and immediately reached out to Folsom Police Chief Rick Hillman to urge him to have the department join the program. He quickly agreed and it was officially launched just four months later.

Valasek said these programs are needed because many at-risk individuals are non-verbal and combative if approached by first responders. She noted that several years ago, officers with a neighboring department had to use significant force to restrain a young man with autism.

“Autistic people often don’t like being touched, so he resisted. We’re trying to prevent that from happening in Folsom,” she said.

So far, she said, 11 people have received Bluetooth beacons. Vitals provided 50 to the city for free; after that, clients will need to buy them, for between $20 and $40 each.

Steve Mase, Vitals’ founder and chief technology officer, said new technology is being rolled out to expand the system’s capabilities.

One project, now in beta testing, will allow caregivers to track at-risk individuals who carry a smartphone with the Vitals app through geofencing.

“For groups using our profile app, we have a mechanism that when an individual leaves home, say, it will transmit a GPS signal — but only when he leaves the house or gets near something dangerous like a lake or river," Mase said. "We’ll have a set of triggers that will happen and will be able to send information to the caregiver and also a live map police can retransmit to a search party.”

He said the new system was asked for by caregivers to help manage people with some vulnerabilities.

“Did your kid bolt out the door while you were upstairs painting a room? Or were you at the Mall of America buying a hot dog and when you turned around your kid was gone? Group homes also asked how they could manage a group if they went to a bowling alley or some other public place.”

Mase said the current system was developed and refined by his wide network of software designers from his many years in the industry. Further technological advances, such as deployment of 5G wireless and artificial intelligence, will allow Vitals to disseminate even more information to clients and first responders. Other new products are in development, as well.

The company charges schools and public safety agencies based on the number of licenses and the length of the contract. Based on published reports, that averages around $7,500 a year. Besides charging for the Bluetooth beacons, Vitals also recently began charging $4.99 a month for its app, with the first month free.

Alleyne declined to provide specifics about financials, but acknowledged that within a few years, revenues are expected to be in the range of several million dollars a year.