If Californians are not already familiar with the details of electric cars, a new multimillion-dollar ad campaign wants to change that. Veloz, a nonprofit alliance of carmakers, electric utilities, policymakers and others, will launch the informational campaign, known as Electric For All, to raise awareness about electric vehicles in the state.
Oct 9, 2018 / By Skip Descant 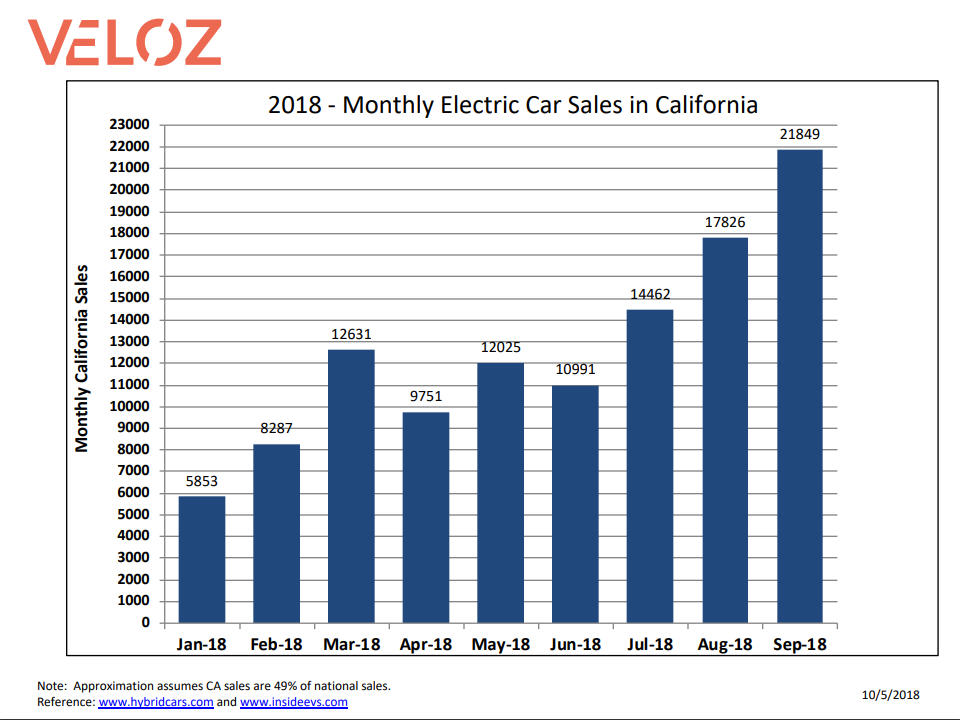 If Californians are not already familiar with the details of electric cars, a new multimillion-dollar ad campaign wants to change that.

Veloz, a nonprofit alliance of carmakers, electric utilities, policymakers and others, will launch the informational campaign, known as Electric For All, to raise awareness about electric vehicles in the state.

“While barriers are disappearing, we still have more than 50 percent of Californians who are unaware — or practically unaware — that there are electric cars that are actually available,” Mary Nichols, chair of the California Air Resources Board, said last week.

The campaign is starting at about $4 million, and includes a $2 million match from Electrify America, which plans to invest some $800 million in the state within the next 10 years to fund EV infrastructure, education and other efforts to expand the use of electric vehicles. Electrify America — based in Virginia and formed in the wake of the far-reaching Volkswagen emissions tampering scandal in 2016 — plans to invest $2 billion in the U.S. in the next 10 years to incentivize the adoption of electric vehicles.

To date, more than 452,000 electric cars have been sold in California, according to Veloz statistics, making up about 5 percent of the total cars on the road. Gov. Jerry Brown has said he wants to see 1.5 million zero emissions cars on the roadways by 2025.

The messaging campaign announced in Sacramento may be the largest and most multi-faceted effort targeting the adoption of electric cars to date.

“I think what makes this effort really distinct and really unique is the multi-stakeholder nature of our movement,” said Josh Boone, executive director of Veloz, as he noted the organization's 35 members.

“This initiative, we feel, is going to be one more arrow in the quiver of all the things required to … really address those barriers to EV adoption, and really make sure that public perception, which today does not match the product’s ownership reality, does indeed change,” Steve Majoros, director of Chevrolet marketing, told reporters.

Growing the awareness of electric cars, beyond the relatively small cadre of early adopters, needs to be part of the “holistic” approach encouraging their purchase, say transportation researchers.

“For any new technology to receive market entry, consumers first need to be aware of it, which would mean they know what an electric vehicle is,” said Scott Hardman, a researcher with the Institute of Transportation Studies at the University of California, Davis, during a recent webinar.

Electric vehicles could play a strategic role in stabilizing the electric grid by encouraging owners to recharge their cars when utilities have an excess amount of solar and wind power, said Ron Nichols, president of Southern California Edison, which will not only provide funding for the messaging campaign, but also aid in the operational support of Veloz.

Moving the needle on EV adoption in California is not only perhaps the surest step to significantly reduce climate-warming emissions; it would also greatly improve the state’s air quality, he said.

“The goal is for electric cars to become the new normal,” said Boone. “We believe that once Californians know about and experience electric cars, they will fall in love with them as a better way to drive.”