The 30-year veteran state executive reflects on the changes he's seen and helped effect, and looks ahead to what comes after finishing his run as agency information officer for two of state government's biggest entities — the Government Operations Agency and the Business, Consumer Services and Housing Agency.
Jun 12 / By Dennis Noone 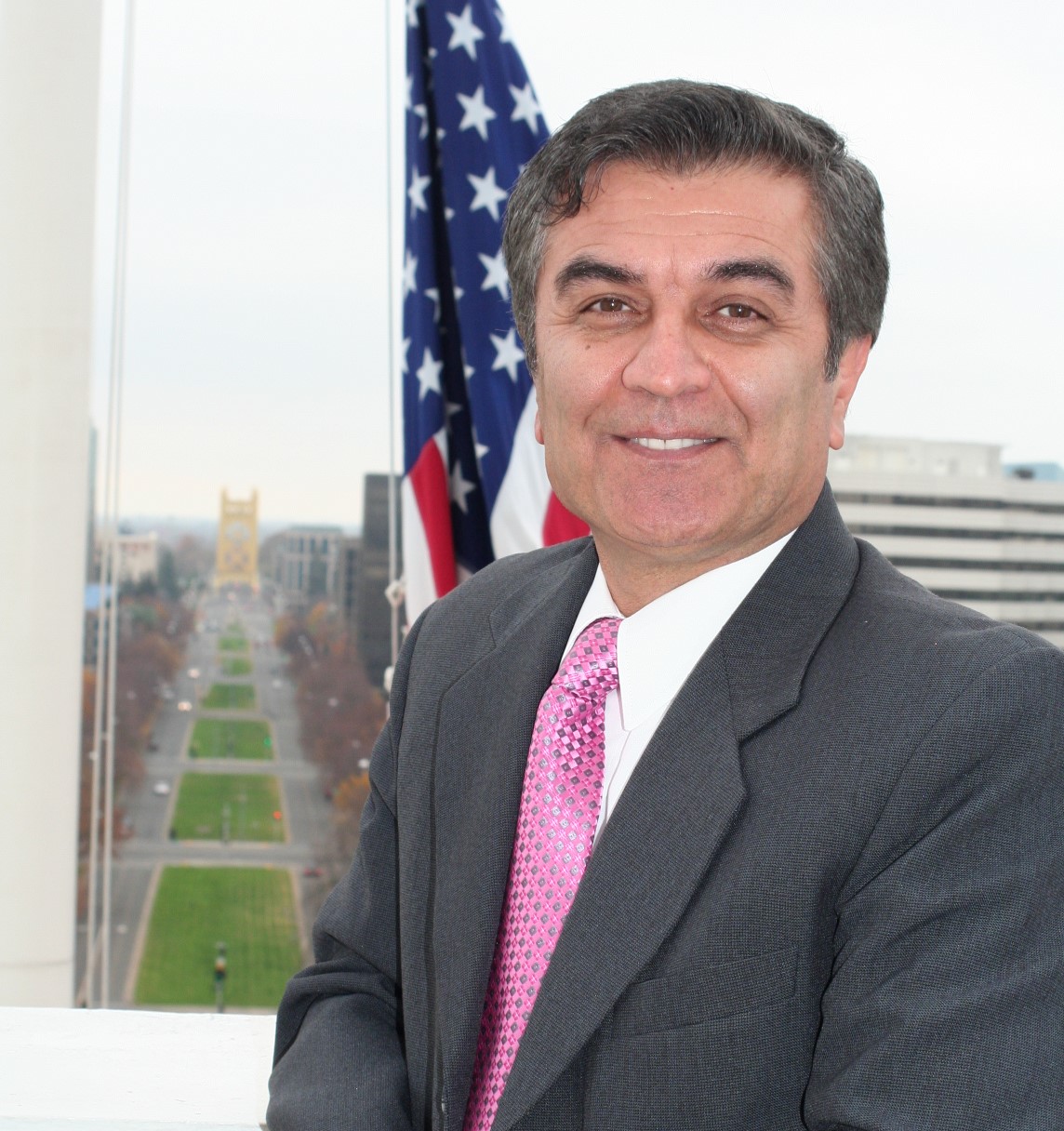 The state’s pioneering agency information officer (AIO), Andrew Armani, has announced that he’s retiring after 30 years of state service. In a video interview with Techwire, Armani discussed the state’s teleworking transformation, the legacy he’s leaving in the IT community, and a hint at some big changes coming in the management structure of two huge state agencies.

It would be accurate to describe Armani as an advocate of “change management” even before that phrase became a buzzword in government IT circles. After decades of working in technology, Armani looks at the state’s sweeping and swift shift to remote working the same way he says he’s always looked at change: “It’s exciting. I’m not afraid of change.”

Armani is the AIO for two of the state’s biggest entities — the Government Operations Agency (GovOps) and the Business, Consumer Services and Housing Agency. He has more than a dozen chief information officer positions in his domain. His job is so sprawling, his responsibilities so vast, that the state is splitting his job into two; both GovOps and BCSH will have their own dedicated AIOs after he leaves the post.

Following are excerpts from Techwire’s conversation with Armani on a variety of subjects — but first, a few words from some who’ve known him best and worked with him for years:

Amy Tong, state CIO and director of the California Department of Technology: “Andrew is an icon and a pillar in the government technology community. From his long career, he will leave a legacy of accomplishments that will be difficult for anyone to surpass. His dedication to public service and community have impacted nearly every state entity including CDT, where he was instrumental in the development and success of the Information Technology Executive Council (ITEC), the governance structure we use today. Yet with everything he has going on, he somehow still finds time to be the only AIO who oversees the IT of not one, but two state agencies. If anyone has earned a long and enjoyable retirement, it’s Andrew Armani.”

Teri Takai, executive director of e.Republic’s Center for Digital Government* and former CIO for the state of California and the U.S. Department of Defense: “Andrew Armani has been such an important leader in California IT for so long — I am not sure how the state will get along without him! Andrew was a major support for me during my time as CIO, and I can’t thank him enough for his sage advice, collaboration and most of all, his friendship.”

Marcie Kahbody, deputy secretary and AIO for the California State Transportation Agency: “Andrew has been my mentor and friend for over a decade. He is a forward thinker who has been a very important part of the IT community as a leader. He has also played an integral role in mentoring future IT leaders. I wish him the best with his upcoming retirement and success in his future endeavors. He will be greatly missed.”

Chris Cruz, CIO for San Joaquin County and former deputy state CIO and chief deputy director of CDT: “Andrew and I worked on the original Email Consolidation Project under then-state CIO Teri Takai. We were Co-Executive Sponsors for this effort. We were able to complete this statewide effort. In his current role as Agency Chief Information Officer for the Government Operations Agency, he also was a sponsor for the State’s O365 consolidation into a single email system. Also, I am thankful that I had the opportunity to work with Andrew in his role as the longtime CIO Academy State Executive Sponsor for several years, as this was our premier event. He did an outstanding job. I wish him the best of luck in his retirement and all his future endeavors.”

Davood Ghods, DirectTechnology’s vice president for Government Practice and former chief of CDT’s State Data Center Services: “Although it’s been a few years since I worked with Andrew, it has always been clear that his dedication to innovation and creative ideas has made a huge positive impact on all of us. The CIO Academy, which was his brainchild, is a great example of that kind of innovative and creative thinking.  Andrew’s guidance and encouragement has helped me and so many other colleagues thrive, and we've been so fortunate to have his knowledge and expertise to rely on. I wish him all the best and hope that the next chapter of his life will bring him all that he seeks and more.”

Armani’s last day on the job will be June 30. After a long run of working in state offices, he’s spending the homestretch by working from his home in El Dorado Hills. He loves it, and he doesn’t see state government returning en masse to the office for at least two or three years, if then.

“It took this (novel coronavirus [COVID-19]) disaster, unfortunately, but I’m pleasantly surprised, he said. “All the departments had to figure out the equipment, what they need to telework, but a couple of the reports that I’ve gotten back are that people are obviously happier to be teleworking. For the most part, productivity has gone up. I can tell you for myself that when you’re in the office, you go from meeting to meeting. There’s always time that you’re walking or driving … but like right now, I’m jumping from one (teleconferencing) meeting to another. I’m working longer hours. It’s working, and I’m hoping that we can continue this. You’re talking about saving a lot of taxpayers’ money. The only problem I can see is bandwidth, but that’s solved by the introduction of 5G. Once it’s introduced everywhere, we’ll see that problem going away.”

Armani said the remote-working shift was among the reasons he chose to retire now.

“I wasn’t planning on doing this this quick. I was thinking about December or maybe later. I’m going to miss talking with people and saying goodbyes in person. That’s the downside. The upside is that I’m actually starting a company, a consulting company, probably opening in July or August. We will be working online, remotely. So this got me used to working at home and having all the tools that I need.

“My feeling is that, at minimum for the next couple of years or so, the state’s going to be in this mode. They may divide people into shifts, but this teleworking is going to continue in one form or another.”

He said it’s been an adjustment, going from meeting with vendors and others in person to doing so via video conferencing.

“It’s not seamless,” he said, but using video calls is better than just a voice call.

“When I see you, at least I get to see the expression on your face,” he said. “Even though it’s all digital, there’s kind of the closeness of sitting across a table. I’ve had great conversations with different vendor partners on Teams or Zoom or whatever. It’s a shift. The private sector has been doing it for years. I don’t think it’s going to have a huge impact, though,” on individuals’ negotiating styles.

After 30 years and two months, Armani will be passing more than the office key to his successors.

“I’m preparing some transition documents, documenting what I’ve been doing — although it’s kind of hard, because I’ve been at the agency for 20 years, and documenting that, it’s going to be ‘War and Peace.’ I don’t think we’ll see anybody permanently before end of August or maybe even longer — and that’s true with both agencies. We’re splitting my responsibility into two — one AIO for GovOps and one for BCHS.

“It makes sense to split it. The reason I could handle that is because I’d been managing for so long. For me, it’s second nature. But any new person who comes in is going to be overwhelmed. I have a lot of big departments.”

Armani is proud of his legacy, and he offered the following highlights when asked:

Armani acknowledges that he could have made a lot more money over the years by staying in the private sector rather than going into government.

“I always felt like I wanted to give back,” he said. “In the private sector, whatever you do is obviously for the good of the company — to make money, and a paycheck for you. Here, what I do is for the people of California. It may sound silly, but everything I did … was always to try to make it easier for people to deal with the state and the public sector. That’s what’s kept me on project after project — to make that happen.”

Mentoring others, he said, was always important to him.

“There were many, many people that I actually mentored and talked with — and still, to this day, there are a lot of people that I am mentoring. Twenty-five years later, I still get calls from people I helped, and they tell me, ‘I’m here because of you.’ Part of the reason that I came up with the CIO Academy was for that: To bring in people, to network, and to tell them, ‘Here’s how you should do this thing.’”

*e.Republic is the parent company of Techwire.