Proposition 24 on the November ballot is pitched as an expansion of California's already robust consumer data privacy law, but the technology giants seemingly square in its sights — the likes of Facebook, Amazon and Google — haven't shown up to the battlefield.
Oct 5, 2020 / By Tribune News Service 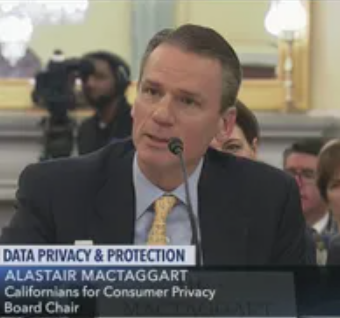 Proposition 24 on the November ballot is pitched as an expansion of California’s already robust consumer data privacy law, an iron cuff on the claws of companies that profit handsomely from tracking and selling your online search, travel and purchase habits to marketers.

But the technology giants seemingly square in its sights — the likes of Facebook, Amazon and Google — haven’t shown up to the battlefield. Instead, those opposing the new California Privacy Rights Act are some of the same types of consumer, labor and civil rights advocates who support its predecessor.

“Proposition 24 is a wolf in sheep’s clothing,” said Richard Holober, president of the Consumer Federation of California and a leader of the "No on 24" effort. “It’s loaded with giveaways to tech companies.”

Not so, said Alastair Mactaggart, the East Bay real estate developer who spurred California’s adoption two years ago of the country's toughest data privacy law. He says he’s now bankrolling Proposition 24 to make the state’s privacy law both stronger and harder for Sacramento lobbyists and lawmakers to water down, and he says he is astounded that anyone would claim otherwise.

“Why would I do that?” asked Mactaggart, who founded Californians for Consumer Privacy to promote personal data protection. “On what planet does that make sense?”

California adopted its current data privacy law, the California Consumer Privacy Act, in 2018 after Mactaggart qualified a similar ballot measure, then withdrew it and worked with lawmakers on a compromise bill. It gives Californians the right to know what information is being collected about them, to opt out of that collection, and to hold companies liable for breaches.

Over the 18 months before the law became effective this year, industry representatives sought to pare back provisions they said would have “unintended consequences.”

Though the law remains largely the same, Mactaggart sought a new ballot measure, fearing that industry lobbying would eventually weaken it.

Mactaggart said Proposition 24 would give Californians protections comparable to those in Europe’s General Data Protection Regulation, which took effect in 2018 and is considered the world’s toughest.

Proposition 24 would expand consumers’ rights to see all information collected on them, which current law limits to the last 12 months. It would add a right to correct that information. Consumers could tell companies not to sell or use “sensitive” information, such as race, sexual orientation and precise geolocation. It would triple fines for violating children’s privacy. It would expand enforcement, establishing a new California Privacy Protection Agency. And it still would allow amendments in the Legislature if they don’t weaken privacy protection.

Critics say the newly enacted state law should get a longer road test before a new initiative. Beyond that, they say, the initiative would lock in a “pay for privacy” provision, allowing companies to charge consumers who opt out of data collection an amount reflecting its value, or to offer corresponding discounts to those who allow collection, such as through loyalty or rewards programs.

Holober said that provision is a bad aspect of current law that will be harder to undo if the initiative passes, comparing it to express lanes.

“If you’re wealthy, you can pay to get onto the electronic fast lane, and if you’re not, you’re stuck in an electronic traffic jam,” Holober said.

Critics also say the initiative would add a two-year delay for workers to learn what information their employers collect on them, and it prevents protections from applying to Californians when they leave the state. They say the new state privacy agency would add bureaucracy and weaken rather than enhance enforcement.

Mactaggart said allowing companies to charge for the value of collected data protects companies that rely on the revenue for their business, he said, such as news organizations.

“They call it ‘pay for privacy’; I call it ‘preserve the free press,’” Mactaggart said.

Mactaggart said he’s not surprised big tech companies are standing down on Proposition 24 — data privacy is popular, fighting it is a bad look, and they're already abiding by similar rules in Europe. But he said criticism from those who would seem natural allies is “pretty disappointing.”

Holober said the confluence of liberal and conservative groups in opposition is telling, and “the silence from the big tech companies is deafening.”

Mactaggart has put more than $5 million of his time and money toward Proposition 24’s passage — nearly all the cash and in-kind contributions raised on its behalf.

That’s far more than the $45,000 raised so far by Proposition 24’s opponents, which included $20,000 from the California Nurses Association political action committee and $25,000 from the Consumer Federation of California. The $113,000 that opponents have spent is more than they've raised.