The state has just 39 hydrogen refueling stations, but could have as many as 1,000 stations by 2030, enough to jump-start the little-known, but environmentally friendly, specialized electric-car market.
Apr 25, 2019 / By Skip Descant 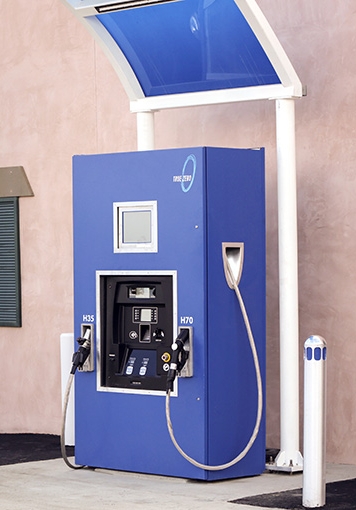 Powering up an electric car is not just a question of plugging in. Drivers can also fuel up with hydrogen gas. Electric vehicles that get their power source from hydrogen fuel are growing in popularity, particularly in California, as the industry expands the number of hydrogen refueling locations.

“For fuel cells and hydrogen in particular, there’s been a notable transition away from the demonstration and research phase," said Andrew Martinez, a hydrogen program expert with the California Air Resources Board, speaking during a recent webinar hosted by Veloz, an electric vehicle advocacy nonprofit in Sacramento. "These are no longer vehicles where essentially every driver is hand-picked. These are vehicles that are getting to real customers on the real market.

“We made that transition, and now we need to look at how do we enable getting to scale? How do we get a much wider distribution of stations today to enable an even greater acceleration of vehicle deployment?” Martinez added.

Today, some 6,300 hydrogen fuel cell cars operate in the state. They are able to refuel at 39 locations, spread from north to south, with 25 more in development, say officials.

Hydrogen fuel cell cars are essentially electric vehicles powered by an electric motor. However, rather than the motor receiving its energy from an onboard battery that must be charged, hydrogen is mixed with oxygen to create electricity. The byproduct is water, and the cars are lauded for being free of tailpipe emissions. But because the  cars need to be fueled with hydrogen gas, they cannot be recharged by simply plugging them into an outlet at home in the garage like a battery-electric car. This is why supporters stress that an adequate network of refueling stations is necessary for consumers to even consider the cars.

The hydrogen refueling station infrastructure is needed to jump-start the adoption of fuel cell cars, according to Bill Elrick, executive director of the California Fuel Cell Partnership (CAFCP). “The market is real. It’s open, and people are purchasing these cars as soon as we can open stations,” he said during the webinar.

“We can achieve that vision of a self-sustaining market through the establishment of 1,000 hydrogen stations throughout the state to support up to, or even more than, 1 million fuel cell vehicles. And our goal is to accomplish that by 2030 or sooner,” said Elrick.

To put the discussion into context, California has about 8,000 gas stations. Placing 1,000 fuel cell stations “strategically across the state” could provide the capacity and coverage needed for drivers to travel anywhere throughout California, Elrick added.

The fuel cell market definitely has some catching up to do. More than 570,000 battery electric cars have been sold in California since 2011, according to Veloz, with sales continuing to surge. Nearly 1.2 million battery-powered EVs have been sold nationwide. There are also more than 40 brands of EVs to choose from. This compares to only three hydrogen fuel cell options: Toyota Mirai, Honda Clarity or the Hyundai Nexo.