The Coachella Valley Water District has updated its IT infrastructure, one aspect of a $16 million capital improvement plan aimed at improving data management, simplifying payments and boosting conservation.
Feb 19, 2019 / By Adam Stone 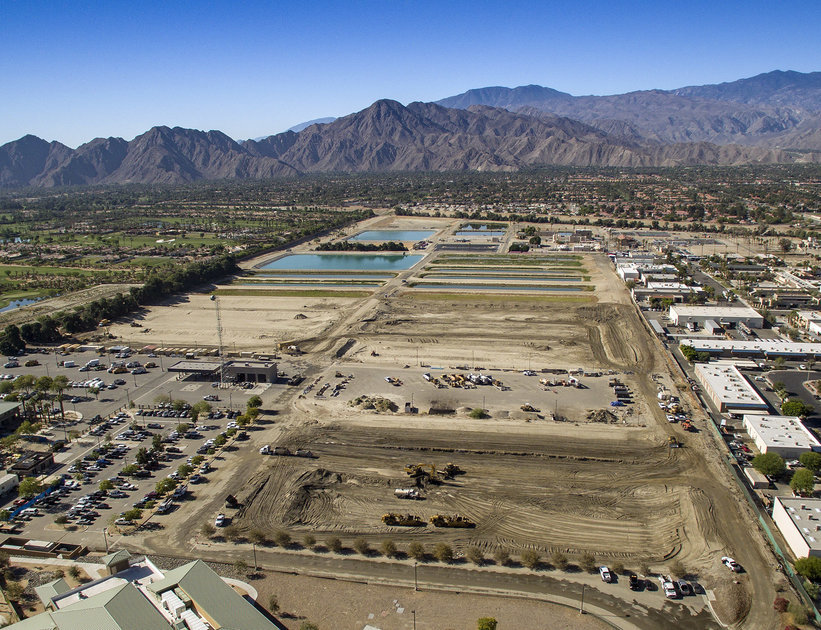 Construction of Coachella Valley Water District's groundwater replenishment facility. The district is in the midst of upgrading its IT infrastructure.

“The legacy system had reached end of life and we were having a hard time maintaining it,” said Maciel, CVWD’s director of information systems. “The SCADA [supervisory control and data acquisition] system needed to be updated. We needed redundant technologies, including in the control room, and we needed a centralized emergency operations center.”

With a recent round of upgrades and enhancements, all these elements now are coming together. The district’s tech investments promise more security around water infrastructure, as well as a more customer-friendly interface.

Located two hours east of Los Angeles and anchored by Palm Springs, the district enjoys the support of a technology-savvy leadership that has shown itself willing to back needed upgrades. “I give a lot of credit to our board members for understanding how critical this infrastructure is," said Maciel. "None of these things can happen without support from the board and upper management."

As it turns out, quite a lot is going on at CVWD. An infrastructure assessment helped inform the district’s strategic plan, which in turn laid the groundwork for the recent upgrades.

The centerpiece is a new control room, according to Maciel. Set to open in mid-2019, it will become the nerve center for all water operations. “It will have a modern new SCADA system and it will also be a redundant control room for potential emergencies, since the old one will stay online so that we can manage the systems from either location,” he said.

The center will be wired with modern, open interfaces in order to allow a greater number of connections and also to facilitate future growth. “It’s easier to add new points to the system: It has higher capacity, which was a limitation under the legacy system,” Maciel said. “It’s also a more agile technology, meaning we can connect to it and manage it from different locations.”

The new center will have higher-grade security infrastructure baked in, and will have a more user-friendly interface. It also will be stocked with redundant air conditioning and power systems, something the legacy system lacked.

Designed to serve as an emergency operations center when needed, the new building will double as a state-of-the-art training facility. “We didn’t want to have an EOC room that only gets used in emergencies," said Maciel. "This is a way of leveraging that investment."

The technology components, paid for through a $16 million capital improvement plan, also include ongoing upgrades to the district’s wide-area communications. Here, too, redundancy and capacity are key enhancements.

“Right now we have slow T1 [data transmission lines] to different sites," explained Maciel. "With the new wide-area network, we will have up to 100 megabits per second in some locations, which enables us to monitor the facilities via camera and to share resources including documents, files and GIS information."

That ability to share data is important not just for smooth operations, but also for effective governance of the water district, said Katie Evans, CVWD's director of communication and conservation.

When it’s time to pursue a rate increase, or when the need arises to invest in additional infrastructure, shared information helps to make the case.

“Having this data will help us to demonstrate why those investments are necessary,” Evans said.

“With a centralized system we will have more robust management for tracking assets’ end of life, for tracking work orders,” Maciel said. “The benefit is tremendous in terms of efficiency. Rather than having to reconcile a whole bunch of spreadsheets we will have a centralized repository where anyone can pull information, run reports, have dashboards and set recurring alerts.”

Even as these diverse initiatives unfold, the district has simultaneously been implementing a new payment system. Not only does the upgraded infrastructure make it easier for customers to pay their bills, it also supports the district’s long-term program of water conservation.

The connection is straightforward: The more customers know about their water usage, the easier it will be for them to conserve. To that end, the new payment system tracks water usage over time, giving customers insights into their own consumption and also giving a gentle nudge when they’re using more than their share.

“Our rates are conservation based; they are to help people reduce their use,” Evans said. “The payment platform will send a signal if they are overusing. It also gives customers access to their past bills and historic information so they can see how they are doing in terms of staying on target with their water budget. This all fits within our overall goals around water efficiency and water conservation.”

At the same time, the new system puts a modern interface on a formerly clunky transaction process, with a pay-by-text feature and other upgrades. Solutions provider Paymentus provided the system at no upfront cost, and is being paid over time via user fees, Maciel said.

“The legacy system was cumbersome to utilize, it wouldn’t accept multiple credit cards, it was hard to reset the password, it was hard to display a bill, it wasn’t compatible with smartphones,” Maciel said. “Now we have a replacement that is intuitive, secure and super user friendly.”