IT leaders in the nation's most populous county have decided to get on board with new office protocols and technology. "It's been great," says the chief information officer's communications manager.
Aug 21, 2019 / By Dennis Noone 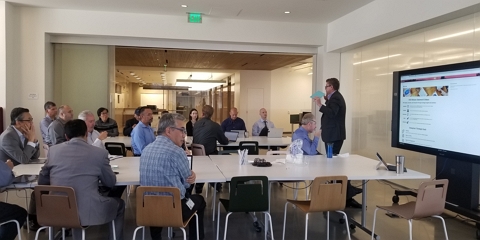 CIO Bill Kehoe and his staff are enjoying their new open-floorplan surroundings, which includes private spaces for vendor meetings.

An open floorplan and plenty of natural light are among the benefits of the LA County Office of the Chief Information Officer moving to new digs in downtown Los Angeles.
Previous Next

Vendors paying a visit to Los Angeles County’s chief information officer, Bill Kehoe, will be in for a different experience from now on, as a result of the office’s shift to an open new floorplan — and a change of address.

The county’s Office of the Chief Information Officer (OCIO) has just finished transitioning away from the traditional walls and offices at its former home, in the Los Angeles World Trade Center at 350 S. Figueroa St. in downtown, and moved into the newly remodeled seventh floor of the LA County Hall of Records Building, at 320 W. Temple St., also downtown.

“It is a great opportunity to model our mobility IT strategic goal while increasing the collaboration and productivity of our high-performance teams,” said Sylvia Boyadzhyan, communications manager for OCIO.

Boyadzhyan told Techwire that the reason for this week’s move is that OCIO leaders “just wanted to create more of a modernized conceptual vision of the modern workplace.”

For vendors seeking private meetings with Kehoe or others, there are still private conference rooms with sliding doors.

“For vendor meetings, we have conference rooms available,” Boyadzhyan said. “We also have a patio area … and a hoteling area, plenty of one-on-one spaces,” where visitors can find a comfortable space to work.

Among the benefits for the roughly 27 staffers, she said: “Enhancing meetings via Skype, and virtual meetings. … You walk in, have your meeting, and then walk out. There’s also noise-canceling technology. … We’ve all had meetings there, and it’s been great. There are a lot of positives.”

But change management, as IT folks know, is never easy.

“It was definitely a transition from the large cubicles and offices that we used to have,” Boyadzhyan said. “There have been some issues with protocols — people getting used to new surroundings. But the new floorplan basically enhances collaborative efforts and teamwork. It’s really nice to have that.”

The plan was in the works for months. Staffers were able to keep their same phone extensions and other trappings.

“The whole vision was executed very well,” Boyadzhyan said. “You do feel like you’re in this whole new environment. It’s very fresh — there’s a modern vibe. They put a lot of effort into making things look really fresh. And it helps when you have large windows looking out to downtown, lots of really good sunlight. We’re not wondering what time of day it is.”

And about that change management?

“We have to learn to work in this new environment,” she said. “It’s helped with cohesiveness: ‘We’re all making the change, and you’ve got to get on board.’ It’ll be great.”

Others in the department have been similarly optimistic; “When we least expect it, life sets us a challenge to test our courage and willingness to change, change is always good, embrace it!” said Patricia Almaguer, an OCIO administrative assistant.

The physical move was done Monday, and Boyadzhyan credited “great planning by the CIO and the CEO’s office.” The OCIO is sharing its new space with a couple of other county departments.

Rachel Bryant, a program specialist in the OCIO’s Analytics Center of Excellence, noted the new office’s proximity to transit: “OCIO is moving to the Hall of Records — right across from the Civic Center/Grand Park metro stop! The new location is much more accessible for staff who take the Metro — or who want to start!”