The Alpha project, a three-month sprint to transform the state’s website into an iterative, responsive platform, is getting assistance from data analytics and other types of user research.
Jan 29 / By Lucas Ropek 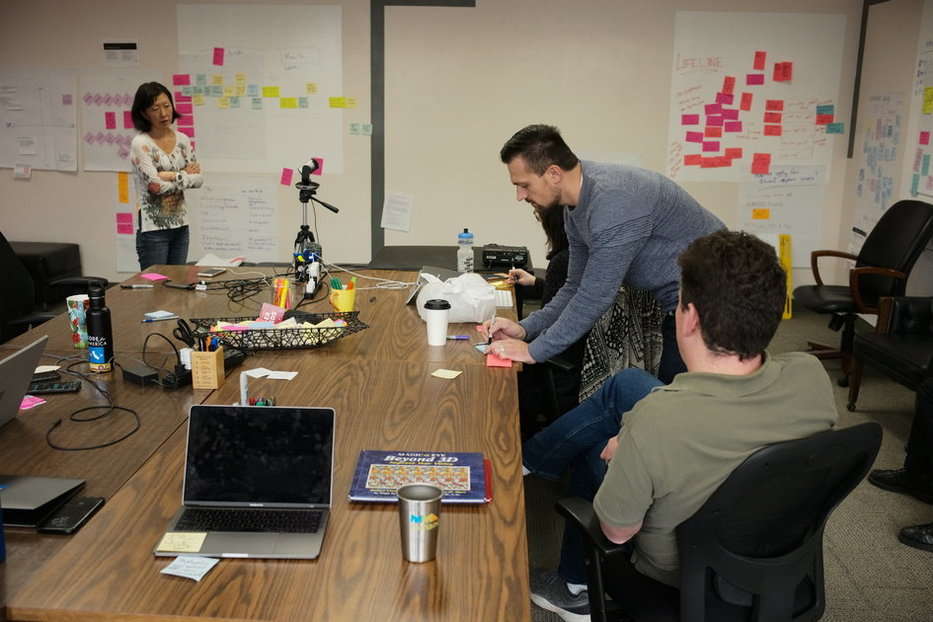 Members of the Alpha team participate in an exercise to imagine the information the public might need during an emergency. ( Eyragon Eidam/Government Technology )

The technologists behind California’s Alpha project, the nascent iterative state website that promises a more responsive, satisfying user experience, have sought to make citizen feedback an integral part of their design process.

Iteration, the idea that a website is continually improved upon through critiques from users, is a relatively new concept in state government development, but the team has looked to predecessors like Gov.UK as role models for this work.

The team met with Government Technology magazine last week in its Sacramento office to explain that the new CA.gov, which promises to centralize information from state agencies, while also providing a flexible platform that gives users more intuitive access to services, is being driven by what the public and agency customers want and need.

Hilary Hoeber, who helms user research for Alpha and has also conducted user and design research for tech giants like Instagram, Uber and Nextdoor, said that a combination of data analytics and more intimate surveys and interviews have informed their work.

User “stories,” or experiences, are a key part of this process and are culled from surveys which Hoeber distributed to communities up and down the state, asking respondents questions about their digital experience with state government. After that, follow-up phone calls between some respondents and Hoeber gave her a chance to do a deeper, more granular dive into their experiences.

“[The surveys are] a way to, at the very least, tap into a greater population and see what people are thinking,” said Hoeber.

The small team is working at breakneck speed to complete its work within a 12- to 14-week window, so the research isn’t necessarily being conducted under ideal circumstances, Hoeber said.

“The surveys are just the result of the time-condensed Alpha,” she continued. “Ideally, we would want to spend more time talking to people, identifying [more] real user needs.”

Those needs and the projects to satisfy them are diverse. When reporters visited the Alpha office, the team was developing a function that allows users to check the safety of drinking water based on location. While this might seem like a relatively simple undertaking, the reality is that defining a thing as safe or unsafe often elicits the need for more information, clarification and research.

Here, like many of its projects, traditional data analytics played a big role in the team’s work. Aaron Hans, tech lead for the project, said that user data derived largely from Google Analytics has been a central metric for evaluating the parts of the website in need of more attention. Data being supplied by state agencies, meanwhile, plays an equally significant role.

“We did a lot of analysis on where people are going on California government sites, and what terms they’re searching on, and what pages they’re looking at and how often,” said Hans. “We do surveys and other testing methods, too.”

“There are carcinogens in your drinking water at certain levels, and when it exceeds the government-mandated level, that’s really bad, but maybe it’s still unhealthy below those levels,” explained Hans.

Through an API developed by the team, data from the agency level allows users look geographically at the relative quality of water, staff explained. The challenge, then, lies in packaging that data in a way that is accessible and understandable for the average user.

Another project aims to alert road travelers to traffic conditions or potential roadwork with data from the California Department of Transportation (Caltrans).

For the traffic function, Caltrans continually shares its updated data with the new CA.gov site to give users an up-to-date status of roads. Users simply enter their starting point and destination to get all the road conditions for that specific trip.

Angie Quirarte, product owner with the Alpha team, said that she hopes the new website “adds value but doesn't try to replicate something else that’s already out there.”

“We’re not trying to replace Google Maps, but we found that there’s a tiny gap in the data that they’re maybe not consuming right now that maybe we could help them see or access,” she said, in reference to the traffic function.

In gathering data for its projects, the team’s user research approach also includes field trips to communities that may be affected by the website’s service delivery so they can conduct more intimate user research. Currently, the team is planning a trip to a California community that recently suffered damages from a devastating wildfire. The team plans to gather information that will influence its approach to emergency support and preparedness services.

At the same time, the team also uses their own experiences with state websites to shape their approach. Team members take themselves through state websites to measure how intuitive — or not — the online processes are, said JP Petrucione, communications lead with the project.

Quirarte, the product owner, said the team's evolving process of critique, input and design is a benefit to a site’s overall user experience.

“For the scope of the Alpha,” she said, “what we’re really trying to learn is how can we simplify the content that’s already out there.”