DMV's New Director: 'This Has to be Solved'

A role that some may see as a nightmare in state government is one Steve Gordon considers “a dream job” and “the opportunity of a lifetime.” The new DMV chief talks about what's possible.
Sep 24, 2019 / By Tribune News Service 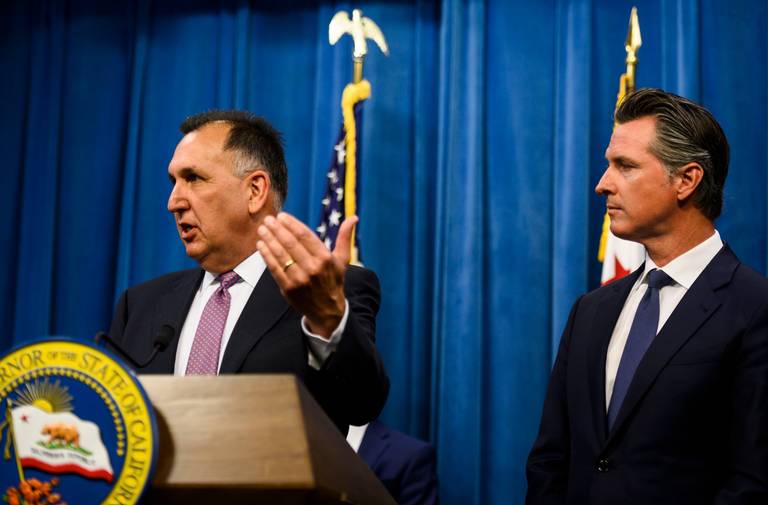 When his wife handed him a newspaper in late March, Steve Gordon was intrigued by the headline. “Hate the California DMV? Here’s your chance to run it,” it read.

When Steve Gordon, 59, applied for the director’s position at the California Department of Motor Vehicles, he hadn’t worked in government in decades and had no political connections. A former tech services leader for Cisco living in San Jose, he did not fit the profile of a traditional applicant.

He was precisely, however, what the state’s Department of Motor Vehicles was looking for.

“I didn’t know if that first interview call was going to come,” Gordon said. “I have no political connections whatsoever, so it took a couple months before I got that first call. But it got serious right after I got that.”

“We’re actually introducing a new team today,” Newsom announced at a July 23 news conference. “We found a new director of the DMV — someone who wanted to do it. We’ll talk to Steve about what he was thinking.”

A role some may see as a nightmare in state government is one Gordon considers “a dream job” and “the opportunity of a lifetime.”

Throughout his career in the private sector, he has worked on a number of projects to modernize technology. He hopes that experience will allow him to revamp an outdated system that a former director agreed was a “40-year-old dinosaur.”

While many of the DMV’s problems come back to technology, Gordon will also try to reduce fears surrounding the department’s ability to process federal Real ID cards and automatically register eligible California voters through the Motor Voter program.

“We’re using my best experience, my network and all the resources of the state,” Gordon said. “Someone’s got to solve this thing, so why not me? Why not?”

Here are some takeaways from a recent interview with Gordon:

Q: What’s the biggest hurdle the DMV has to face today other than Real ID and Motor Voter?

A: I’m going to have to back up because I think Real ID is part of that challenge. The real issue with Real ID is capacity. We’re trying to get people to not come in that don’t need to come in. We’re also trying to get people with vehicle registrations into kiosks and doing it by mail. Part of it is actually making room for Real ID. That means I’ve got to transition people to other service channels, and make sure our website is much more usable, much more helpful. The reason Real ID is critical is it’s a forcing function for me to be able to address some of the other things that have lagged. It creates an opportunity, because of the demand that’s coming with Real ID, to make sure people get migrated into other channels.

There’s numerous challenges, right? We’ve just awarded a contract for swapping out our network, and it’s critical for us to have an infrastructure where we’re going to scale out services, do things more online and make sure things are measured in megabytes versus kilobytes. If you saw the state audit report, one thing that caught my eye was they’re measuring the performance of our (DMV) network in kilobytes. I haven’t heard of kilobytes in 30 years since you had a 64 KB modem. That was a long, long time ago. You have probably never seen a 64 KB modem. That was world-class 30 years ago. The fact that (they were) measuring things in kilobytes per second was alarming. Let’s just say that.

Getting an infrastructure set up so we can run a modern enterprise, we could train our people remotely without having to fly them around, and do webinars with the local office. We can do just the things you would expect to do. Simple things.

Q: Do you ultimately want a paperless DMV?

A: I’m not sure we’ll be paperless, but I think we want to get it so that it’s as modern as it can be. We need to be digital-first, we need to get mobile-first, but we’re not close to there today. ... There’ll be a part of our demographic that is used to paper and used to coming in the office. My mother’s in her early 90s. Changing the way she behaves and her relationship with the computer is probably not going to happen. We need to be able to allow people to exist where they are, but we can’t design around them as our primary demographic when, in fact, the largest part of our demographic is people my age and your age. We have to be able to design for those different groups.

Q: Walk me through a typical day for you at the DMV from start to finish.

A: I like to get up and think. Today, 4:30 a.m., I was up. I usually find a Starbucks that’s open early. There’s only a few of them in the city that are open by 5 a.m. I like to sit down there and absorb the things I need to read for the day, things I need to think about, plan out my day to some degree. Some of my day, I have control over. Some of it is controlling me. I like to think about that. What are my points of views on issues? Am I influencing the people I need to influence? How do I want to discuss a certain topic?

The rest of the day is really just going through and making sure that the schedule that you’re trying to hold is on something that’s kind of helping us drive forward. We now try to be on time, have an agenda for whatever we’re going to meet about. We try to determine in that agenda whether a decision needs to be made. If there’s a decision that needs to be made, are the decision-makers in that room? That kind of stuff so we can actually be efficient in everyone’s use of time. That’s lather, rinse, repeat throughout the rest of the day. By 5 p.m., things seem to wind down. Last night, I was out the door by around 6 p.m. and having dinner in downtown Sacramento by 6:30 p.m.

Q: Some people may see this as an overwhelming challenge. Why do you view this as a dream job?

A: First of all, both can be true. It’s huge. It can be overwhelming at times. But we’re trying to look at it in small pieces. I view this as a taxpayer to the state, as a DMV customer. This has to be solved. Someone’s going to have to solve these fundamental issues. We’re breaking it into smaller pieces. We’re using my best experience, my network, all the resources of the state. Someone’s got to solve this thing, so why not me? Why not? We’re going to leverage the best talents available and execute as best we can. Are we going to get everything right? No, but we’re going to get enough right that we’ll be able to see a material change in the DMV hopefully by the next time you go to the office.

Q: Complete this sentence. We will know the DMV is successful when ...

A: We’re going to see the DMV is successful when our clients are talking about the DMV’s success (and say), ‘I was able to get in, I met with the staff, they anticipated my need and they were able to fulfill that need.’ That’s success.