Drones and aircraft equipped with infrared and other technology are helping California fire crews by offering a real-time bird's-eye view — even through smoke and flame — of what's happening on the ground.
Aug 14, 2018 / By Tribune News Service 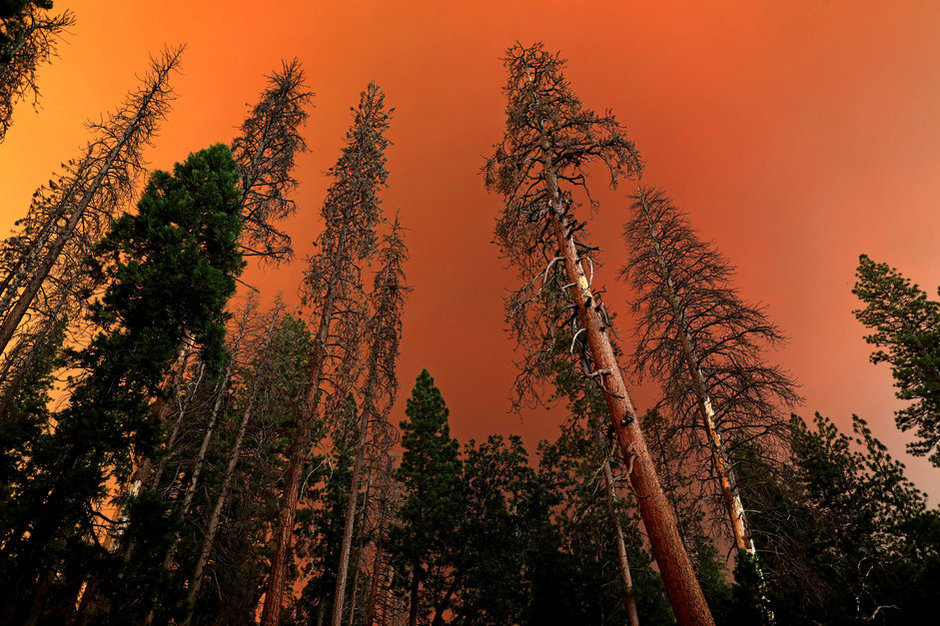 WAWONA — The smoke creeping up from a steep hillside near this small California community 27 miles south of Yosemite Valley was a sure sign that a spot fire was burning, hidden beneath the tall pine trees.

In years past, firefighters might have proceeded with just the limited information provided by a helicopter operator struggling to see through the haze.

Instead, a California Air National Guard aircraft with infrared capability flying thousands of feet above the Ferguson Fire was able to determine that firefighters were facing not one spot fire but seven, which were quickly growing together.

Amid weeks of conflagrations and heat waves that have shattered grim records across California, the Ferguson fire has made some good history: It marked the first time incident commanders battling a wildfire have been able to tell firefighters what was being reported from high above the fire in exact detail in near real time.

“For firefighting, it’s a game-changer, no doubt. And it’s only going to get better,” said Damian Guilliani, situation unit leader on California Interagency Incident Management Team 4, which helped battle the Ferguson Fire.

Firefighting technology in California took a big leap five years ago, when the Guard first used a large drone to fly over the Rim Fire in San Diego County. It sent video footage back to an operations facility.

Since then, the Guard’s 163d Reconnaissance Wing has helped fight more than 20 wildland fires.

The California Air National Guard arrived at the Ferguson fire on July 18, initially employing drones as well as a manned aircraft. (The drones soon were diverted to the Carr and Mendocino Complex fires.)

Command leaders fighting the blaze that has closed Yosemite Valley indefinitely have taken the Guard intel and gotten it to their troops on the ground — hotshot crews, incident mapmakers and air assault teams — within 15 minutes.

Leaders anticipate that in coming fire seasons, that process will only become more efficient.

The Guard’s aircraft can fly at night and at high altitudes, above the smoke, recording video via infrared technology. It also can fly around the fire’s perimeter faster than a helicopter.

The region’s unforgiving landscape — steep, rocky hillsides and deep canyons and cliffs — has made portions of the wildfire too perilous to reach. Nearly 50 percent of the Sierra National Forest is wilderness, making it one of the largest contiguous blocks of such land in the continental United States, according to the U.S. Forest Service.

Instead of focusing on fighting the fire with a perilous frontal assault, crews have worked for days to burn a boundary around the fire to keep it from reaching farther into Yosemite National Park and toward the small communities along Highway 41.

Along with 33 bulldozers, dozens of hotshot crew members have journeyed miles through the forest to carve out a fire line against the spread of flames. Usually a crew — often dropped off by helicopters into the forest — can construct a mile of line in a setting like the Sierra National Forest in one day. Because of the number of trees killed by drought and a bark beetle infestation that have fallen throughout the region, they’ve been lucky to construct one-third of a mile of fire line, officials said.

Between 2010 to 2017, an estimated 129 million trees have succumbed in California. That includes two areas where the Ferguson fire has burned: 31.8 million dead trees in the Sierra National Forest, and another 9 million in the Stanislaus National Forest.

“A fire of this magnitude means there are a lot of different challenges and a lot of different obstacles in firefighters’ way,” said Joe Amador, a public information officer. “It’s not just about taking a hose up the hill and putting it on the fire and then (the fire) goes away.”

Hand crews have spent days working 16-hour shifts using chain saws, Pulaskis — part ax, part grub hoe — and other tools to clear miles of manzanita and other brush along roads and highways in preparation for back burning. The technique, which involves firefighters burning a line around a wildfire, is designed to slow or stop the blaze by depriving it of fuel.

“(Clearing brush) makes the burning operation much more safe and effective as a whole,” said Jennifer Martin, a crew boss trainee with the Forest Service overseeing a hand crew of about 20 people last week.

“If we have full brush, it’s going to be throwing embers across,” making it hard to hold the fire line, she said.

To avoid the danger, he said, firefighters do their best to avoid them, trying to make sure they are uphill from the dead trees and being mindful to identify which ones they think might fall.

“Imagine a sparkler that’s 150-feet tall that’s throwing sparks across our line,” Peterson said. “That’s the problem. That’s what makes it a challenge. It doesn’t take much wind to carry those (embers) because the trees are so high.”

That’s part of the reason the California Air National Guard’s presence has been so crucial.