“There’s buy-in to bring this in to help spur and drive innovation,” San Joaquin County Chief Information Officer Chris Cruz told Techwire. “It’s the data center of the future.”
Sep 8 / By Dennis Noone 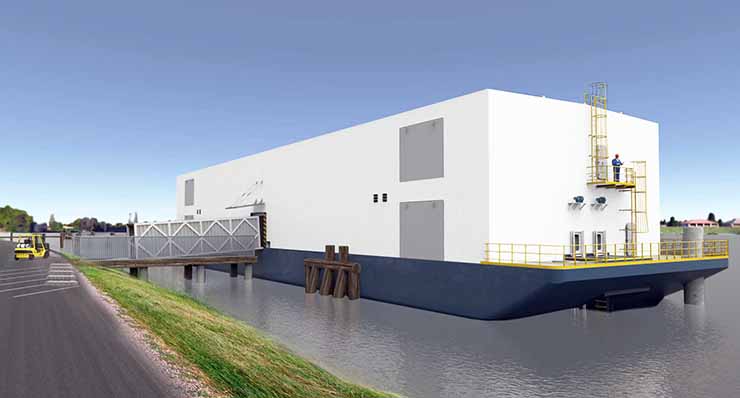 This is an artist's rendering of the Nautilus floating data center. ( Nautilus Data Technologies )

A revolutionary type of data center has barged its way into San Joaquin County — but it was invited, and it’s being warmly welcomed.

Nautilus Data Technologies, based in Pleasanton, has docked its 250-foot barge in the Port of Stockton, where it will serve as the backup data storage facility for San Joaquin County government, its first tenant.

Though the idea of a floating data center was first envisioned by Google in the form of a 2007 patent application, the technology took years to iron out. When San Joaquin County switches over to the barge for its data backup during the last week of October, it’ll be one of just a few such vessels in operation anywhere in the world.

The adoption of the barge as cloud was given added impetus by San Joaquin County Chief Information Officer Chris Cruz, who came to that role in April 2019 after having served as deputy state CIO and chief deputy director of the California Department of Technology (CDT). Cruz said the initial discussions about bringing the barge to Stockton began under his predecessor, Jerry Becker, who was subsequently promoted to assistant county administrator before moving this week to a state strategy role with the California Department of Transportation.

Nautilus, which received $100 million in funding last spring, refurbished the former freight barge in Vallejo and then navigated it through Suisun Bay and along the San Joaquin River to its dock in Stockton. After some delays related to the COVID-19 pandemic and other factors, it’s in its new home and is scheduled to go live at the end of October.

Cruz said he’s hoping that the county’s tenancy at the data center, for which it pays a nominal fee, will attract other governments, as well as nonprofits and the private sector. He said the county has received support from, among others, the city of Stockton and the San Joaquin County Board of Supervisors.

“There’s buy-in to bring this in to help spur and drive innovation,” Cruz told Techwire in an interview. “It’s the data center of the future.”

The idea of a floating data center has multiple advantages, according to Cruz and Nautilus.

By any measure — especially the metrics — the project is impressive in scope. It’s a Tier III data center, which means it guarantees 99.982 percent availability with less than two hours of downtime per year. Tier III data centers are the most common of all levels used by the private and public sectors, and are generally considered appropriate for small to medium-sized businesses.

The San Joaquin barge uses no external power — it’s run by turbines, using water in the port. That water is also used for the data center’s cooling — often the most expensive part of running such a center. The barge takes in water below the surface (with filters in place to avoid sucking up fish, plants and other solid matter) and uses that water to cool the servers. The water is then slightly chilled to bring it back to its original temperature before being discharged back into the port, so as to minimize the effect on the environment.

The data center barge has two decks, each housing racks. It will be staffed 24 hours a day, seven days a week, with the tight security characteristic of data centers. While most tenants can access their servers remotely, the barge will be staffed with IT technicians in case hands-on help is required. It also has Wi-Fi connectivity. Nautilus touts the following specs:

With both the public and private sectors well into a cloud-first strategy, it’s not surprising that data centers are undergoing various transformations.

CDT, for example, contracted with the city of Los Angeles in March 2019 to host the city’s data center needs. The $10.5 million, three-year contract allowed the city to transition away from using 30-year-old mainframe technology, while helping the state cover the costs of running its data center in Rancho Cordova.

While the state hasn’t yet made any agreements with the San Joaquin County data center, it is aware of potential opportunities to do business together.

Richard Rogers, the state’s deputy CIO and CDT’s chief deputy director, told Techwire in a statement: “Our network services will be available for connectivity, so there will be partnerships in delivering this new data center backup services.”

And the Nautilus barge won’t be competition to the state, according to Scott MacDonald, CDT’s deputy director of infrastructure services.

“The Floating Data Center is expected to support services local to the counties, which are primarily not in direct competition to the state’s data center,” MacDonald told Techwire in an email. “The City of L.A. contract is for specific mainframe services for which CDT has developed a pipeline of skilled staff to support that technology, where others typically struggle with retaining and recruiting qualified IT staff with the proper skill sets.

“Our initial discussions with the San Joaquin CIO’s Office have been in regard to using CDT’s data center resources as a backup to services offered by the San Joaquin County Nautilus Floating Data Center,” MacDonald noted. “However, the state is always looking for opportunities to increase its availability of services while reducing cost. As we develop this partnership, we expect to look for opportunities that are beneficial to both the county and state.”

MacDonald indicated the possibility that San Joaquin could route its traffic back through CDT, which he said “opens up the possibilities for the county by being able to take advantage of CDT’s 24/7 Security Operations Center and threat analytics.”

Said Cruz: “I think this is awesome. It’s a great thing in innovation and transformation. It’s not just policies and procedures; it’s about really doing things in a transformative and innovative way. We’re utilizing efficiencies — reusable water, electricity being generated right from water in the delta. … It’s pretty cool.”