The barge docked in the Port of Stockton is up and running after years of planning — and months of delays caused by the COVID-19 pandemic.
Apr 2 / By Dennis Noone 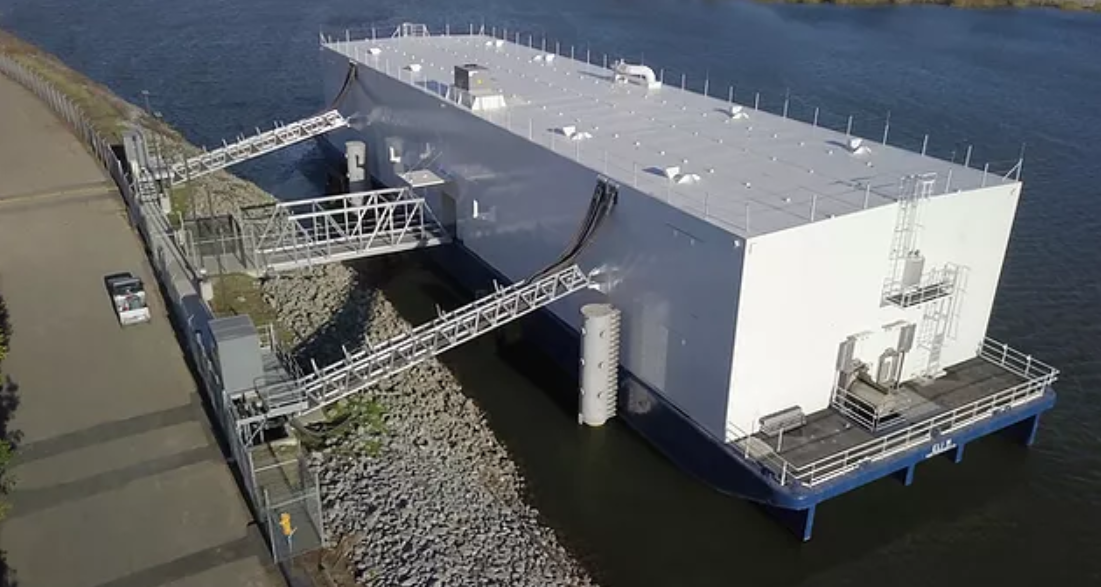 The barge that’s been placidly docked in the Port of Stockton since last year is now quietly — very quietly — up and running as a data center.

San Joaquin County moved its data backup and disaster recovery operations from a data center in Stanislaus County to the barge in Stockton in January, after several years of building and fine-tuning and dealing with COVID-related delays.

The county is the anchor tenant on the barge, said Chris Cruz, San Joaquin’s chief information officer and director of technology. Other tenants have already been brought on board, including one well-known social media platform that has asked not to be identified. Cruz envisions the barge as a magnet for other public and private entities who want to store data on the innovative vessel.

The two-story barge is packed with racks, each holding servers, just as any other data center might be. But the barge — owned and outfitted by Nautilus Data Technologies, based in Pleasanton, is different in some big ways from land-based data centers.

Chad Romine, Nautilus’s co-founder and vice president of business development, shared his enthusiasm for the project during a recent interview in his dockside office, where he rattled off the specs from memory:

The barge consumes no water; all the water it takes in for cooling the data center is recooled and then discharged back into the Port of Stockton. Romine said the entire operation was vetted thoroughly for compliance with the California Environmental Quality Act and meets every standard.

The barge houses a Tier III data center, which indicates 99.982 percent availability with less than two hours of downtime per year. Tier III centers, the most common of all levels used by the private and public sectors, are generally considered appropriate for small to medium-sized businesses.

The data center has two decks, each housing racks. It is staffed 24 hours a day, seven days a week, with the extremely tight security characteristic of data centers. While most tenants can access their servers remotely, the barge will be staffed with IT technicians in case hands-on help is required. It also has Wi-Fi connectivity.

The barge is tethered to two massive concrete pilings that extend down into the bedrock under the Delta. Two thick bundles of cables linking the vessel to the dock contain lines for power and data, and there’s an onshore power transformer nearby for power backup if needed.

The barge itself is outfitted with fish screens, to keep aquatic fauna and flora from being sucked into the barge’s massive water intakes. The filters ensure that as the cooling waters move rapidly through ducts from the stern to the bow of the 250-foot barge — a quick trip that takes about 10-12 seconds — no stray species are trapped inside.

In its former life, the barge hauled freight. Nautilus bought it and refurbished it in Vallejo, and it’s one of just a few such vessels in operation anywhere in the world. Nautilus, which drew $100 million in funding last spring, had hoped to have the data center operational by last fall, but delays occurred in the supply chain due to the COVID-19 pandemic.

Cruz said the floating data center has received support from, among others, the city of Stockton and the San Joaquin County Board of Supervisors.

“There’s buy-in to bring this in to help spur and drive innovation,” Cruz told Techwire in an interview last fall. “It’s the data center of the future. … I think this is awesome. It’s a great thing in innovation and transformation. It’s not just policies and procedures; it’s about really doing things in a transformative and innovative way. We’re utilizing efficiencies — reusable water, electricity being generated right from water in the delta. … It’s pretty cool.”

State government technology leaders are aware of potential opportunities to do business with San Joaquin County.

Scott MacDonald, the deputy state chief technology officer in the California Department of Technology, last fall broached the possibility that San Joaquin County could route its traffic back through CDT, which “opens up the possibilities for the county by being able to take advantage of CDT’s 24/7 Security Operations Center and threat analytics.”

As for Cruz, he’ll be bidding “bon voyage” to the floating data center in a few weeks; he’s retiring from the county at the end of April and entering the private sector.