The Vitals app will give police officers instant, critical information, including audio and video to show to the subject, on those vulnerable individuals who possess a Vitals beacon and come within 80 feet of an officer.
Jan 14 / By Jim McKay 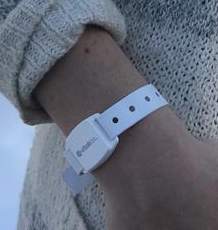 The Folsom Police Department will now have more than a binder with photos in it at its disposal when trying to find individuals who may have disabilities and may be lost.

The department is deploying the Vitals app, which will provide officers with instant information on registered individuals from vulnerable populations when those people come within 80 feet of an officer. Vulnerable citizens, such as those with autism or dementia, who have signed into the program and have a beacon will have their information stored in the cloud until the beacon is activated by the cellphone of an officer within 80 feet. At that point, the citizen’s vital information will pop up on the officer’s phone.

“This technology allows concerned family members or caregivers to provide certain personal information to first responders when it’s needed most,” Folsom Police Chief Rick Hillman said. “It’s ideal for children on the autism spectrum, those who are at risk dealing with mental health issues or those who worry over an elderly family member who tends to wander away.”

The app allows family members, for a monthly fee of $4.99, to input vital information that an officer can use to de-escalate a situation when encountering that individual who possesses a beacon. That information can include photos, medical data, what to say to the individual that may help de-escalate a situation, even audio and video of a loved one saying, “It’s OK, the police are here to help you.”

“Sometimes just knowing somebody’s name makes a difference,” said Vitals Aware Services' President and CEO Janeé Harteau, who worked as a police officer for 31 years. “This is about anybody who has an invisible condition. People are using this as a living, breathing medical alert bracelet.”

Harteau said the technology has been deployed by more than 70 public safety agencies since being launched in 2017. The Folsom PD paid $7,500 for a year of service and received 50 free beacons, which it’s giving out on a first-come, first-served basis. The beacons come in the form of bracelets and keychains that the registered community members wear.

Harteau said all the data resides in the cloud and can’t be accessed by the beacon, should it be lost. “It is driven by the community members that want their information in it,” she said. “It’s a secure cloud space and the information is only on the officer’s phone during the time they are within that 80 feet.”

The police department devotes a lot of resources when looking for at-risk people who may be lost, and time is of the essence. It’s important to get to them before they are hurt or wander farther away. And the app eliminates the step of dispatching relevant information to officers, saving time. It also gives police a tool they can use to avoid having to stop and talk to everyone who may fit the description of the person they are looking for.

“This is putting an electronic binder in the hands of officers in the field,” Hillman said. “And when we find that person, the ability to show a child their parent in a video saying, ‘It’s OK, the police are going to help you,’ will put them at ease and help us all out.”