For Santa Clara, Another Try with Tech and Transit 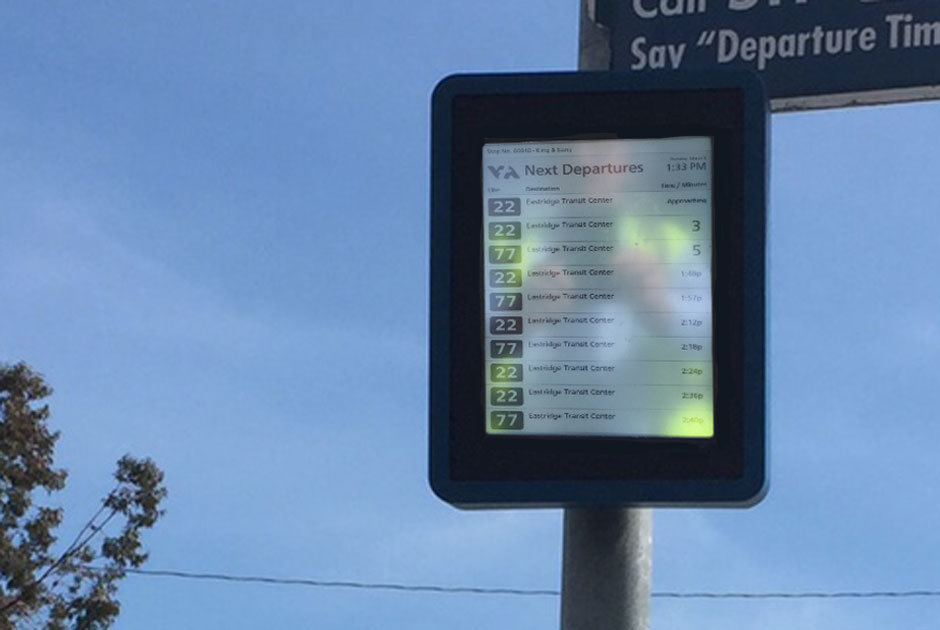 Earlier this year, the city rolled out some 120 smart signs, intended to give travelers up-to-the-minute transit information along with bus schedules, maps and other data. It also has introduced nine large, interactive screens at high-volume transit hubs.

Much of this information is available via app, “but not everybody has a smartphone,” said Gary Miskell, CIO of the Santa Clara Valley Transportation Authority (VTA). “We think 65 to 70 percent of riders might have a smartphone, but that leaves about 30 percent of our rider population without access to that information.”

The city tried to address the gap with a 2010 effort that Miskell describes as disappointing. In that iteration, officials rolled out 87 real-time LED information signs, covering a small fraction of the total 3,500 bus stops. The numbers never worked out.

“Because of the power needs, the cost of the installation dwarfed the cost of the signs,” Miskell said. “These were the red LED signs that have been around in transit forever and they are power hungry. We literally had to go pull power from PG&E [the local utility] and stick a meter on them. To do that at 150 or 200 locations would have cost millions of dollars, and we would have had no flexibility. Once they are in place, you cannot move them.”

The city’s new solution comes in the form of a CHK American digital bus stop, a solar-powered kiosk with a 10-inch information display that costs about $3,500 to buy and install. The city plans to install about 120 by the end of the year.

“So we knew that whatever we did next, we wanted it to be solar. We wanted to be able to install it in hours, not in days, and not require permits and have to work with the power company,” Miskell said.

VTA also sought to deliver more than just current ride information and wait times. Planners wanted signs that could display urgent notifications, and could also show kind of the route and schedule information that up until now has been the subject of a laborious paper process.

“Every time you change the route or the timetable, you have to have someone get in a car and replace all these pieces of paper that are in shelters and bus stops, so we can’t be flexible in changing routes because it is too darn complicated,” Miskell said. Using the new system, a few keystrokes at headquarters will push out route changes across all the kiosks.

In addition to the smart kiosks, the city also is deploying another CHK America product, the ConnectPoint SmartStop, at stops located within half a mile to three quarters of a mile around a popular community center that is not accessible by bus.

Riders arriving at these bus stops will be able to use an interactive terminal to request a lift, and the community center will dispatch a shuttle.

In a third transit-tech play, Santa Clara has deployed nine 47-inch Civiq interactive touch screens at the local airport, convention center and other high-volume locations. At $25,000 to $30,000 each, these have the potential to speed large volumes of travelers to their destinations.

“You come off the airplane, you come down the stairs and you here’s a place where you can plan your trip. Here are points of interest, here is your hotel, here is how you can take transit to get there,” Miskell said. “It is interactive, so you put a dot on that map that says that’s where you want to go and it will give you a route and tell you how to get there.”

Santa Clara is also eyeing its large-format signs as a possible landing place for paid ads.

“It can be done, but it really depends on how many people see it per hour. Advertisers aren’t interested in a 10-inch kiosk at a single bus stop. But a 47-inch unit that is seen by thousands of people, they are definitely interested in those,” Miskell said. “We think it would definitely offset the operating cost and maybe even help to pay for other signs as it picks up.”

So far the signs have proven to be relatively low effort from an IT point of view, something planners said was a priority going into the project. “Our prediction engine generates real time information, and it’s the same information we push out to our mobile app and to the third-party mobile apps,” Miskell said.

While the new generation of smart signs outpaces the dumber, energy-hungry platforms of 2010, this deployment remains a learning exercise. As planners put the new signs through their paces, they still are laboring to understand the metrics of success in a transit setting. How do you know whether your smart sign investment is paying off? What’s a “win” here?

“If somebody touches or interacts with it, I can log that. But if someone just walks by and sees that a bus is coming in three minutes, we can’t know that. We’d have to have someone out there observing, and that is time consuming and expensive,” Miskell said.

He has in fact stood at the bus stops, observed riders and questioned drivers about the adoption of the new signs. “At one of the units, no one had even noticed it, and it was because we had installed it higher up. You had to look up to see the unit,” he said. “It was clear that people see the unit at 42 inches, but they don’t necessarily notice it when it’s mounted up higher.”

As these lessons roll in, they are fed back to the VTA’s innovation lab, which aims to develop, test and showcase new technologies related to transportation.

“The whole smart stop idea is a part of that innovation effort,” Miskell said. “We went out in the field, we did two hack-a-thons to understand what kinds of things VTA is not doing, what kinds of things people want to see from us. It’s all about thinking outside the box and not doing what you normally do.”

This story originally appeared in Government Technology, one of Techwire's sister publications.