Inside the New CA.gov Web Portal

California has redesigned its CA.gov homepage so that it’s a dynamic portal instead of a static website. It's the first overhaul since 2013.
May 10, 2016 / By Matt Williams 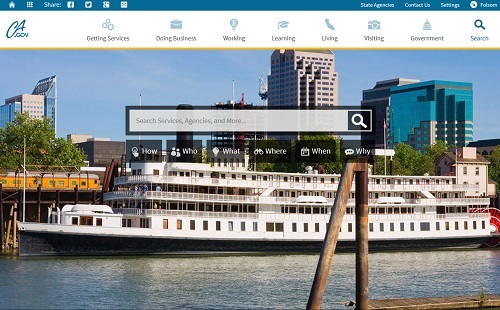 Screenshot taken from a CA.gov user in Sacramento

California has redesigned its CA.gov homepage so that it’s a dynamic portal instead of a static website.

The new look and new features include geospatial capabilities that tailor imagery and content based on the user’s location, reorganized presentation emphasizing access to e-government services, and a full-service content management system on the back end.

“It’s maybe not a one-stop shop yet, but that’s our ultimate goal as we move forward ­— to get to a place where California citizens can get the services they need from their state easily,” said Lynda Gledhill, deputy secretary for communications for the Government Operations Agency.

The project took shape last year after Gledhill and GovOps convened a “portal working group” of large and small agencies and departments to gather input on the new CA.gov. The Department of Technology was heavily involved in the site’s development and content migration, and SymSoft also worked on the build. Design and development took less than a year, officials said.

One of the project’s goals was to design the website so it takes fewer clicks for a user to find information. To do that, California looked at other states’ websites and used analytics to rearrange the page and add new links, elements and features. California utilizes a Google appliance on the CA.gov domain to measure mobile visits, page time, most popular pages, transactions and other pertinent data.

“All in all, the look, the feel and experience ­— the notion of it being a portal instead of a flat website with links ­— those are some of the real highlights that have changed and moved the portal in a positive direction,” said Scott Gregory, who worked on the project for the Department of Technology. He’s now leading the department’s new Office of Digital Innovation and Technology Engagement.

On the public-facing end, CA.gov is based on a standard web template that Gregory’s team built and maintains for the state of California. It will be made open source this year, he said. The CA.gov website also is now easier to use and view on mobile devices, Gregory said.

Users can now choose to enter their ZIP code in order to see imagery and content that’s specific to their region. Someone in Los Angeles will see different photos than somebody in Sacramento. The portal also will deliver different results based on location for State Parks, DMV field offices and other government services.

On the back end, a new Sitecore content management system should help the state update information on the site more efficiently. Having a CMS (the old site was Java) ­— could someday allow agencies and department to control their own content and profiles on CA.gov.

“We don’t want to do anything in a vacuum. We want to put our best foot forward, looking at this not so much as a technology ­— although technology is a big piece of it ­— but more as a communications tool to really get the message out,” Gregory said.

The state did not immediately provide a total cost for the project. CA.gov was last redesigned in 2013. 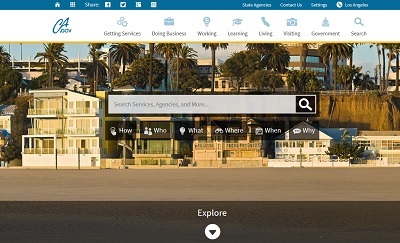 The visuals on CA.gov can change based on the user's location. The website's main photo is different for a Los Angeles ZIP code.