The Los Angeles County Department of Medical Examiner-Coroner is exploring several significant IT initiatives that could help it raise efficiency and maintain its national accreditation.
Apr 24, 2019 / By Theo Douglas 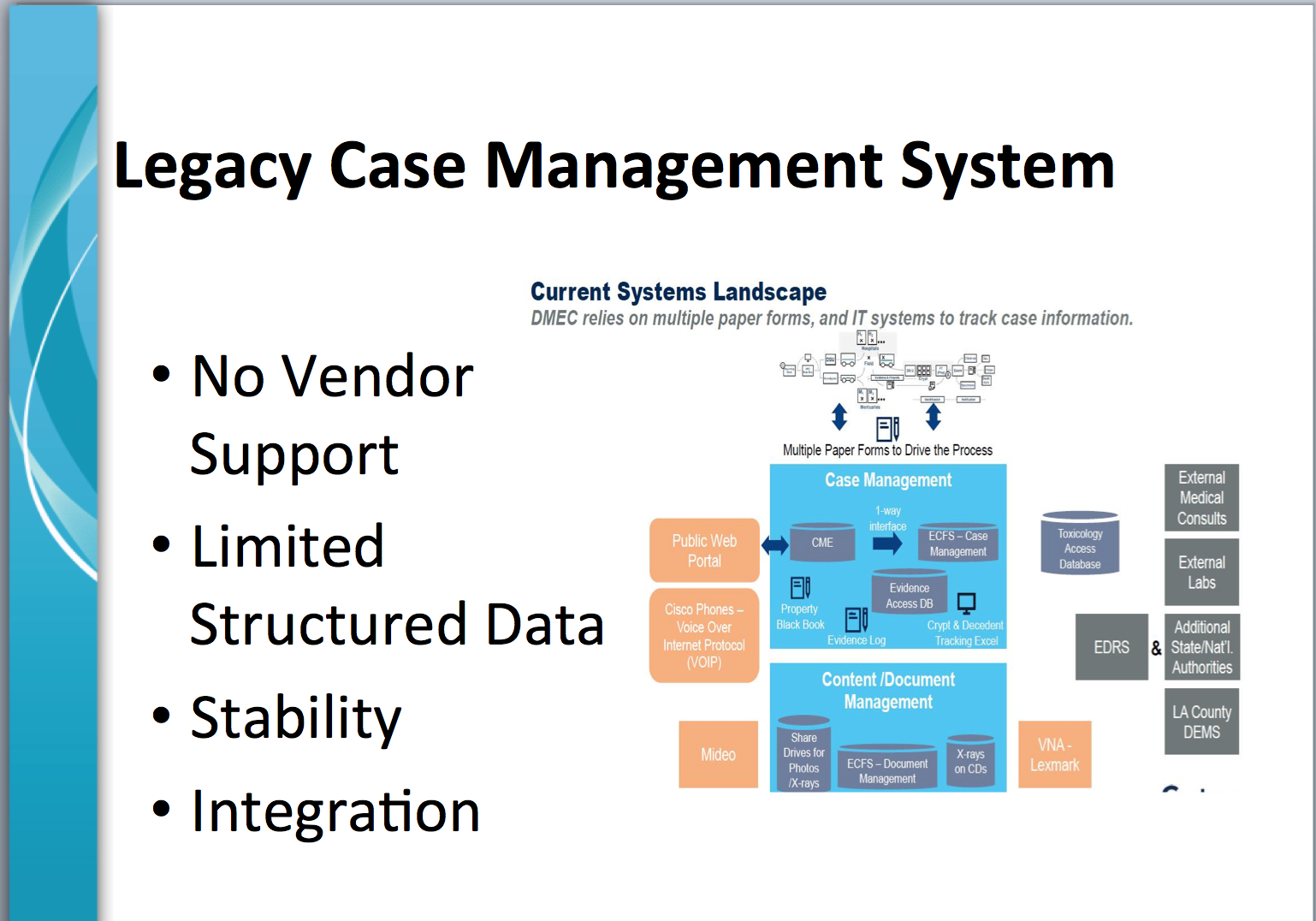 A linchpin Los Angeles County department that’s something of a hybrid between public safety and health is focusing its IT goals and plans a vendor-related decision in one important area later this year.

The Los Angeles County Department of Medical Examiner-Coroner is targeting its explorations of potentially key IT initiatives around the goal of resolving ongoing efficiency issues and maintaining accreditation, its CIO Darwin Sypinero said. Among the takeaways from remarks Sypinero made during the Techwire Industry Briefing With Los Angeles County, on Tuesday in Hacienda Heights:

• The agency received 12 vendor responses to an RFI released in late 2018 seeking solutions that could integrate its case management system. The current system is roughly 20 years old and utilizes paper to address a lack of electronic sophistication.

Officials are reviewing the vendor responses, Sypinero said; and “hopefully in the next year, we’ll be able to ... either develop an RFP or identify a vendor or a specific solution that will help us.”

“The better we can take that data, capture it correctly, appropriately, organize it appropriately, then we’ll be able to drive some efficiencies,” the CIO told Techwire.

• The department is accredited every three years by the National Association of Medical Examiners based in part on its ability to complete an autopsy within 72 hours of a case being reported, or a case or a body delivered. With the goal of preserving that rating when the agency is next up for accreditation in more than two years, officials are scrutinizing its case management system as well as workflow and business processes. The department, which obtains jurisdiction of around 10,000 “non-natural death” cases a year — nearly 17 percent of the county’s approximately 60,000 annual deaths — has worked with Gartner to look more closely at process, and is undertaking a business process review.

• Workforce mobility is another key initiative. Because investigators and other staffers may spend considerable time in the field, “being able to document on-site, at the scene, being able to publish that, being able to have the medical examiner review it in real time” is crucial, Sypinero said.

• An automatic call distribution system is another helpful tool the agency hopes to implement during the next few years, the CIO said. The department currently has a reporting desk that receives its calls; but absent the higher level of data and analysis that automation could bring, efficiencies are going unrealized.