The Los Angeles County Metropolitan Transportation Authority has put out an RFP to develop what it is calling a “micro-transit” program that would take passengers from one destination to another at a low cost, traveling in a ride-share vehicle.
Nov 1, 2017 / By Skip Descant 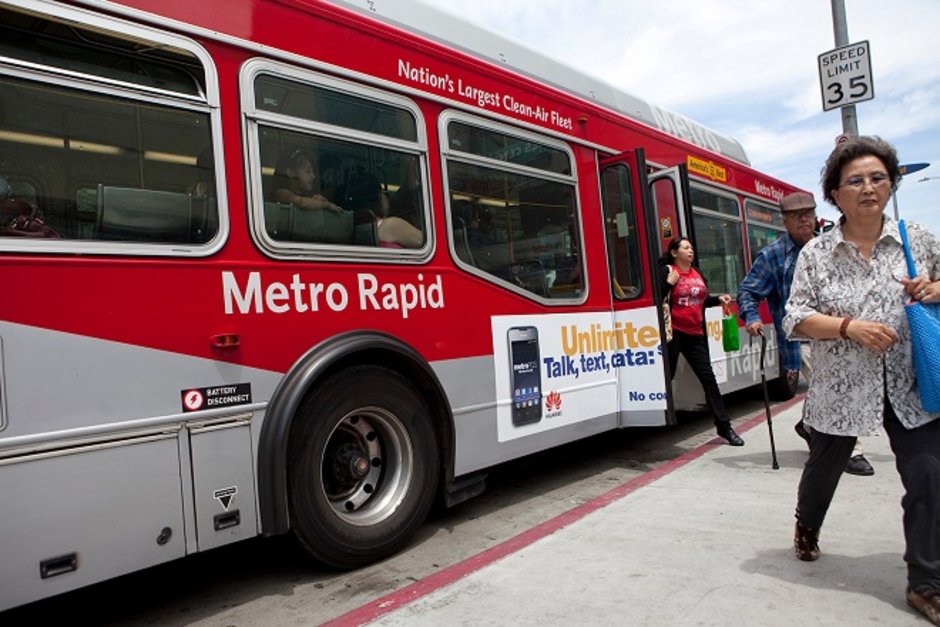 Transit riders in Los Angeles could get a new mobility option that works something like a hybrid version of Uber and a van pool.

The Los Angeles County Metropolitan Transportation Authority (Metro) has put out an RFP to develop what it is calling a “micro-transit” program. The request is to produce a pilot program that would take passengers from one destination to another at a low cost, traveling in a ride-share vehicle.

“Think of it like a van or a mini-bus,” said Joshua Schank, chief innovation officer for Metro. The idea is the developer will create the software to make this on-demand transit program function.

“Our intention is to make the same Metro service that’s provided with our operators and our vehicles, just using someone else’s software,” said Schank.

The entire concept is still in the early stages, and Metro wants the developers to determine the overall structure and coverage area.

“We want the folks who design this thing to have some skin in the game and be a part of the process,” he said. “We didn’t go out and say, ‘We want to do it there.’ And then learn, well actually, that technology doesn’t work there. We want them to help us decide where it goes, and what it looks like, within certain parameters that we’ve set out in the RFP.”

Part of the thinking behind an on-demand, micro-transit project is to serve the Metro riders who may have a more convoluted trip-plan.

“You could think of someone who is currently using buses to get somewhere, but they have to transfer twice, and it takes an hour and a half. Now, they have this service that gets them there in 20 minutes,” Schank explained.

Metro’s intent is that micro-transit riders would also get some sort of discount if they transfer to a bus or train.

The concept is viewed optimistically by outside observers familiar with the Metro and its projects. Phil Recht, an attorney specializing in California government relations with the Los Angeles-based Mayer Brown law firm, praised the effort saying a micro-transit program could turn around sinking ridership trends on Metro and help to close the dreaded first-mile/last-mile phenomenon.

“I actually think it’s a smart move on the part of LA Metro,” Recht said in an interview with Government Technology.

“Transit ridership is down despite the fact that, for years now, we’ve been expanding and building our transit system. So, we have new lines — and the new lines are quite popular — but overall, transit use is down. Bus use is way down,” he added.

Overall, Metro ridership dropped 5.7 percent in 2016, compared to 2015. And ridership in the first six months of this year is down 5.8 percent compared to the same period last year, according to the agency's statistics. More than 415.6 million riders used the service in 2016, which is spread across 1,433 square miles and includes 105 miles of rail service and 170 bus routes.

“Metro, instead of putting its head in the sand about the reduction in ridership …  is saying, ‘OK, we get it. We’re going to get in the middle of it.’ And that’s good stuff,” said Recht.

At first glance, what Schank is describing seems to closely resemble ride-hailing services like Lyft or Uber.

“When you think about who can do this, it’s people who have software that can dynamically route vehicles for this type of service,” said Schank. “It could be folks like Lyft and Uber who have that technology, if they’re willing to let us use it.”

Schank said he’s not terribly concerned about opposition from the taxi industry or transportation network companies, if only because the micro-transit concept needs to be structured to enable car-sharing. In other words, you would likely not be the only passenger in the vehicle — and it needs to be accessible to everyone, not just those with a smartphone and bank account.

“And as far as taxis, the taxi business is not really about shared rides,” Schank added.

“Uber commends their continued commitment to ensuring Angelenos have access to multiple and complementary modes of shared transportation solutions,” Uber spokeswoman Stephanie Sedlak said in an email to Government Technology.

“I think it’s terrific that they’re doing it,” said Recht, commenting on Metro’s move at offering another card in its public transit deck. “I think it shows flexibility and forward thinking on the part of Metro. These micro-buses have been shown to be successful in other markets. And there’s no reason why they wouldn’t be successful here.”