The city has created a path for other municipalities to make it easier than ever for agencies to share information with the public and each other.
Feb 16, 2016 / By Daniel C. Vock 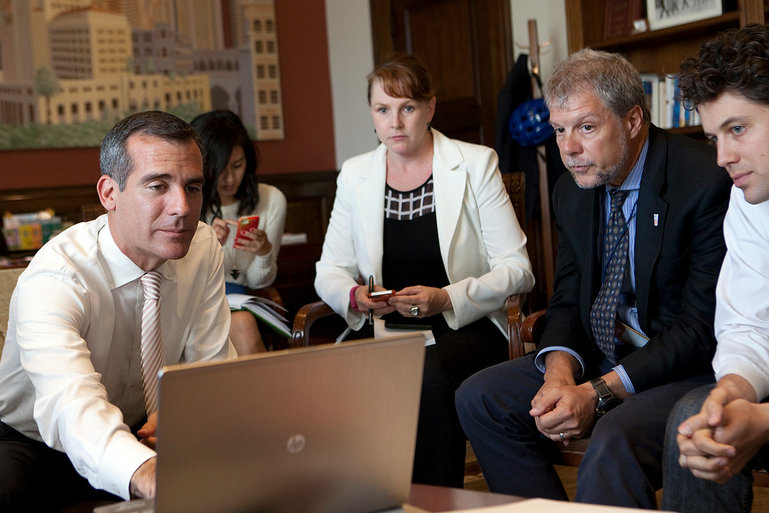 Shortly after taking office, Los Angeles Mayor Eric Garcetti made it clear he wanted street projects to be better coordinated and timed. “No more Bureau of Street Services paving a street on Monday, [Department of Water and Power] digging it up on Tuesday,” he said.

Now the city has a tool to make sure that doesn't happen.

City employees can go online and see whether the road they want to repave is already scheduled to be torn up soon for some other reason, like replacing a sewer pipe. If it is, they can hold off. Residents can also see the same information, so they know, for instance, how long their street will be under construction.

The new tool is called Street Wize, and it's only the tip of the iceberg for what L.A. wants to accomplish by sharing its real-time information with the public. Street Wize pulls info from the city's new GeoHub site, which hosts 500 types of geographic data on medical clinics, historic earthquakes, zoning restrictions, oil wells and movie studios, to name just a few.

"In the past, they may have known the data was collected, but really being able to visualize it allows people to think creatively about how they can use it," said Lilian Coral, the city’s deputy chief data officer.

Street Wize isn't the only result of this data.

Another tool shows how many miles of roads have been repaved under the Garcetti administration. Yet another supports the city’s Vision Zero campaign to eliminate pedestrian deaths. It explains that nearly two-thirds of all serious or fatal collisions occur on just 6 percent of the city’s streets and shows where they are.

Curious users can also see raw information from the data sets plotted on maps, and the data can be used by more sophisticated geographic information system software. City officials hope that will make it easy for other government agencies, researchers and private developers to come up with their own uses for the data. They could, for example, find out where zoning rules prevent dense development around transit stops.

Some of the biggest users of the online library are city agencies that couldn't previously access information from other departments. So while Street Wize was designed to help the street and water departments, it's also now being used by the fire department to help speed emergency response times, said Coral.

Within a .75-mile radius, users can see where and what the 144 projects are. (Street Wize)

Assembling all the data sets and developing the GeoHub website took about six months. From a technology standpoint, the team could have assembled the data even faster, but it took longer to collaborate with the departments and build agencies' support for the project, according to Coral.

People involved with developing GeoHub say agencies eventually got on board not only because the mayor led the effort, but also because the site’s developers showed them how it could improve their own operations.

The data was easy to assemble, according to developers, because it's all based on GIS software from the same company, Esri, which is widely used in local governments. Because of that, Esri marketing executive Christopher Thomas said it would be a relatively straightforward process for other communities to launch sites similar to GeoHub.

After all, Los Angeles did it with more data than most cities ever have to handle. “For all the small and mid-size cities,” he said, “this is all really doable.”