As co-working has grown in popularity in San Francisco and other cities, IBM and, most recently, Microsoft have planted some of their workers amid the startups.
Dec 2, 2016 / By Tribune News Service 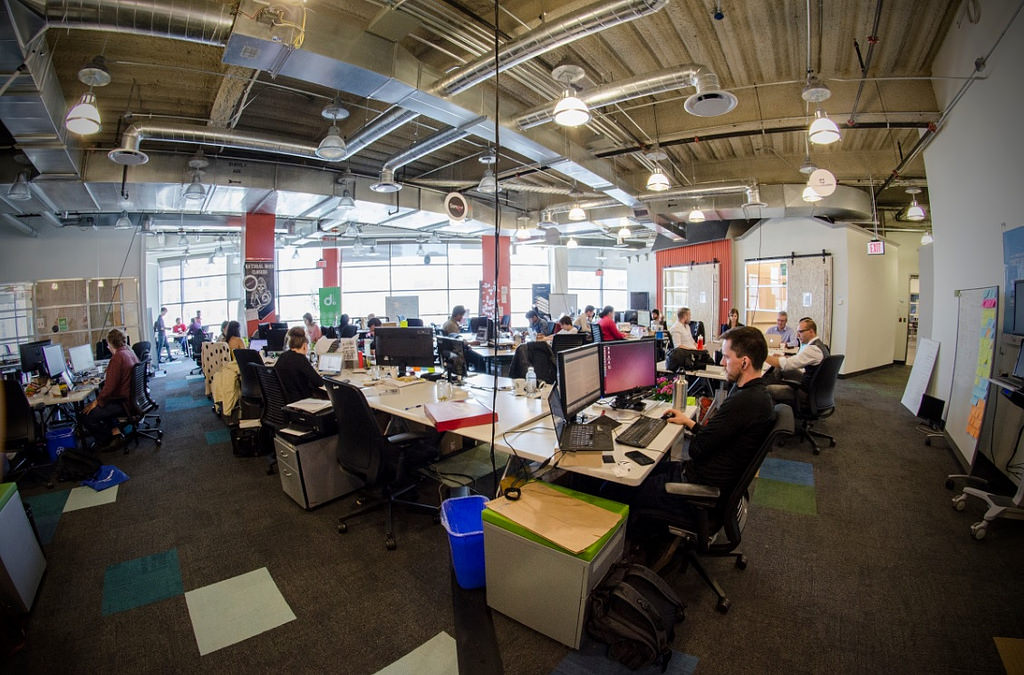 IBM has established "Bluemix Garage" spaces around the world where business clients, including startups, can meet with IBM employees to discuss how to build apps using its Bluemix cloud platform. (FlickrCC/Ibmphoto24)

Some large tech companies are so eager to reach entrepreneurs that they are renting spaces inside workplaces aimed at startups.

These workplaces, known as co-working spaces, cluster startups together in open floor plans. Strangers can easily chat at the water cooler or coffee machine, and startups uncertain about their future can generally get short-term leases. As co-working has grown in popularity in San Francisco and other cities, IBM and, most recently, Microsoft have planted some of their workers amid the startups.

Being in closer proximity allows the big companies to offer their expertise to small businesses using their products and get feedback on how to make the platforms better.

“Large organizations do this to understand what’s happening out in the workforce and in the world,” said Robert Siegel, a lecturer in management at the Stanford Graduate School of Business.

For similar reasons, most technology companies favor open-plan arrangements within their own offices — to promote the exchange of ideas.

IBM has leased a space in San Francisco for the past two years from a co-working company called Galvanize. It’s an area where IBM’s business clients, including startups, can meet with IBM employees to discuss how to build apps using its Bluemix cloud platform. The San Francisco space, which the company calls the Bluemix Garage, is one of eight such locations IBM has opened worldwide, said Angel Diaz, IBM’s vice president of cloud and open tech.

“The kind of innovation that occurs there is very unique,” Diaz said of the Bluemix Garage spaces. “It allows you to expand your mind. You can really innovate much more if you have the ability to bounce ideas.”

In addition to receiving feedback on products, getting to know developers in spaces like Galvanize has also helped IBM recruit, Diaz said.

Microsoft is also trying out co-working. Last month, it gave 300 employees memberships to the co-working company WeWork, which has locations in San Francisco and 33 other cities worldwide. The arrangement allows employees to sit in the common areas and use meeting rooms for private conversations with business clients. Employees in sales, finance and marketing located in New York, Atlanta, Philadelphia and Portland received the memberships, said Matt Donovan, general manager of Microsoft Office marketing. (Earlier this year, Microsoft offered a discount to WeWork members on Microsoft Office 365 subscriptions for businesses.)

“Keeping our teams fresh and connected where great ideas happen in the marketplace can only make them better,” Donovan said. WeWork’s locations, especially its numerous offices in New York, allow Microsoft employees to be closer to where their clients are and have more flexibility, he added.

WeWork offers the companies access to private rooms and offices, including those that could require key cards to open, Fano said.

Some companies are seeking out the startup buzz in a different way: They are creating their own spaces for young companies and entrepreneurs rather than renting co-working spaces. Google of Mountain View recently opened this type of space in San Francisco, where it hosts tech events and office hours. In the past, Google hosted some of these events at its office in Mountain View. Independent developers can get support from Google employees in what Google calls its Launchpad Space, and the company will also host entrepreneurs visiting from abroad there.

Part of the reason why Google opened the space is to support innovation and learn from entrepreneurs, said Roy Glasberg, global lead for Google’s Launchpad program. Plus, if Google can help Android developers achieve their goals, that also helps the company, he added.

“Any developer that builds on Google’s technology that is successful, that means success for Google,” Glasberg said.
Wendy Lee is a San Francisco Chronicle staff writer. Email: wlee@sfchronicle.com Twitter:@thewendylee