Mindful of modernization's potential pitfalls, Gov. Gavin Newsom said the state is trying to "go small and build on successes" as it updates technology, initiates culture change and brings in new executive staff at the Department of Motor Vehicles.
Jul 23, 2019 / By Theo Douglas 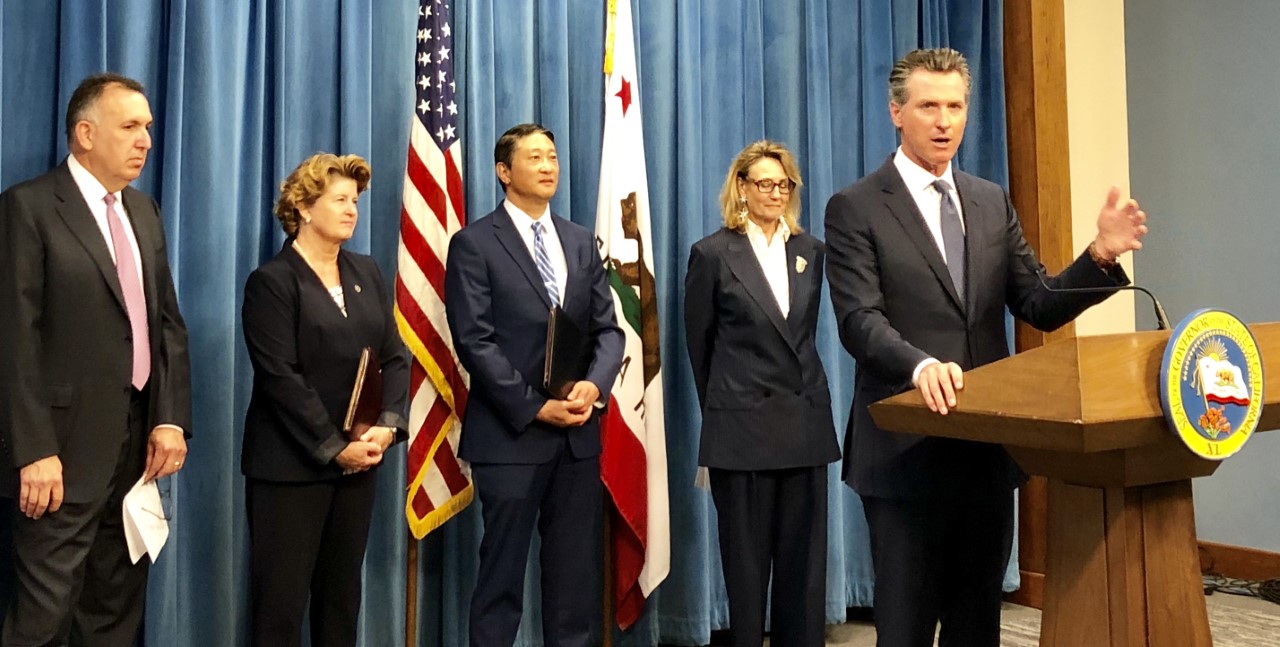 Modernizing technology and culture at the Department of Motor Vehicles, an agency whose architecture in some cases “predates COBOL,” is challenging but already underway, Gov. Gavin Newsom said Tuesday, introducing new DMV executive staff and announcing the debut of credit card payments.

In a news conference at the State Capitol, Newsom also announced the release of a report by the DMV Strike Team, which Newsom assigned Government Operations Agency (GovOps) Secretary Marybel Batjer to lead two days after his inauguration. Among the takeaways:

• The state, Newsom emphasized several times during his remarks, is not going big – choosing to modernize DMV “but at the same time, do it in a very systemic and sequential way.” Earlier this month, the state retained HOK Consulting Inc. to “develop a pilot project concept for DMV field offices,” the Strike Team said in its report.

Newsom said it’s about reimagining the future of DMV, the “experiential qualities” of a field office visit – and whether that should be “more like an Apple store experience.”

The Strike Team also selected McKinsey & Co. after a competitive process to “thoroughly explore the complex issues surrounding Real ID and suggest ways to improve processing.” Around 28.2 million people “may desire to get a Real ID” ahead of the Oct. 1, 2020, deadline, the governor said, calling it a “broad universe” and indicating the state has hired more than 1,800 DMV staff, the majority of them temporary, to serve that need. Residents will need the federally mandated identification card to fly domestically without a passport.

“They’re about process improvement. They’re about getting under the hood of things, solving problems systemically,” Newsom said, referring to Batjer and Webb. Gordon, the governor noted, applied for the director position via the state’s website and said he couldn’t “be that guy screaming and yelling about government without doing something about it.”

Gordon called this “an exciting time to be at the DMV” but said he knows tremendous work lies ahead. “We will not modernize the DMV overnight,” he said.

• DMV will add the ability to accept credit card payments – something Newsom has mentioned from the earliest days of his administration – in September. The agency will pilot the concept at its field office in Davis, adding it to field offices in Victorville, Roseville and Fresno in October.

But here again, officials “want to go small and build on successes,” Newsom said – so they’re not going big.

“So, pop-ups, more kiosks, different partnerships, a process improvement approach. Bringing in the future by bringing HOK (Consulting) and others to reimagine a DMV experience that will allow us to accelerate a new strategy and approach. We don’t want to just pave over the old cowpath, but we need to stabilize things in these 172 field offices,” Newsom said.

• More oversight is on the way. A DMV audit by Ernst & Young should arrive in a “couple of weeks,” said Newsom, who added that the Strike Team “in real time has anticipated a lot of its findings and have incorporated strategies and findings to address it.”

Asked whether he has confidence in the California Department of Technology -- which last year helped roll out the troubled Motor Voter automatic voter registration program -- and its Director Amy Tong, the governor said: “I am reviewing all things IT-related. We have created a new digital service office. I will be hiring 50-plus people. I will take a personal interest in who those folks are.”

• Asked by Techwire to clarify the role of the new Office of Digital Innovation in the modernization of CDT, Newsom said officials must change the culture. Pointing to Silicon Valley, Newsom described the state as “cutting edge” but said its procurement and engagement processes are “inadequate.”

“You talk about clay layers: You’ve got these contracts that it takes years to get out of. We just had a policy a few years back where we couldn’t even get cloud-based services. It was specifically excluded," Newsom said. "It’s not just about throwing money at a project; you’ve got to change the culture.”