The Executive Order, which sets a minimum broadband goal of 100 megabits per second download speed for state agencies under Newsom’s authority, directs several departments to “regularly convene private-sector companies in an effort to understand and predict current and future demand for broadband."
Aug 17, 2020 / By Theo Douglas 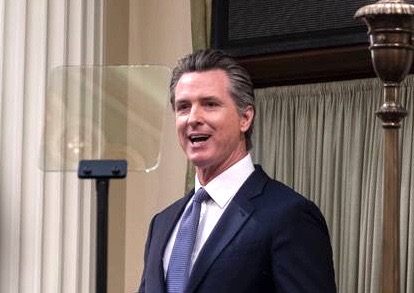 • Emphasizing broadband’s large potential to drive distance learning, telehealth and data use during the pandemic, the EO directs CDT, DGS and the California Governor’s Office of Business and Economic Development (GO-Biz) to “regularly convene private-sector companies in an effort to understand and predict current and future demand for broadband,” in order to enable the state to “allocate resources and manage policies and programs” supporting broadband goals and innovation.

• The EO also directs the CBC to create a new State Broadband Action Plan by Dec. 31, and to review it annually. The EO sets a minimum broadband speed goal of 100 megabits per second download speed for state agencies under Newsom’s authority, “to guide infrastructure investments and program implementation” to benefit residents. The plan incorporates that speed goal, and the order directs CDT’s Office of Broadband and Digital Literacy to support and monitor implementation of the plan and the EO. Plan goals should include a road map to accelerate deployment and adoption of broadband by state and local government; publicly available information on all federal and state funding opportunities; and “provisions to maximize” the inclusion of tribal lands in broadband access and adoption opportunities, per the EO.

“THIS is why I moved to the public sector, to spend my time moving the needle on missions that matter,” CDT's Stephanie Tom said on LinkedIn. As the department's deputy director for strategic planning, broadband and digital literacy, she described herself as “proud to lead California’s first broadband executive order in over a decade.”

• CDT, working with DGS, is directed to look for chances to “leverage the state’s contract authorities as resources to further statewide broadband access and adoption.” GO-Biz is directed to identify funding opportunities for broadband deployment and adoption by coordinating state agency efforts to maximize such funding; and by collaborating with cabinet-level agencies, departments and “independent constitutional officers” on a list of funding sources to support “broadband, equipment and digital literacy.”

• Among deployment aspects, CalOES is directed to work with jurisdictions implementing Next-Generation 911 to expand broadband infrastructure “to enhance public safety and disaster response”; the California Public Utilities Commission (CPUC) in collaboration with CDT and other departments should seek opportunities to use programs under its jurisdiction to “accelerate broadband deployment and to leverage utility infrastructure to increase access to existing fiber”; and DGS should inventory state property “for possible use for broadband infrastructure” based on criteria from CPUC, the California Department of Transportation and other agencies. The California Department of Food and Agriculture is directed to “identify and facilitate” new broadband projects in support of “precision agriculture and food systems in rural communities;” and with CalOES to inventory broadband connectivity at all fairgrounds.

• CDE is “requested to continue leading statewide efforts to ensure … students have the computing devices and connectivity” they need for distance learning and online instruction. On Aug. 5, CDE announced discounted service by T-Mobile and “special pricing” from Apple on its iPad + cellular — which it said “has been available to schools on top of its education volume pricing.” The companies expect to be able to offer “at least 100,000 devices … through the back-to-school time frame,” and fulfill school district demands through the end of the calendar year, according to CDE.