PG&E says it hopes to set up 40 microgrids over the coming years in areas subject to frequent planned outages.
Nov 25, 2019 / By Tribune News Service 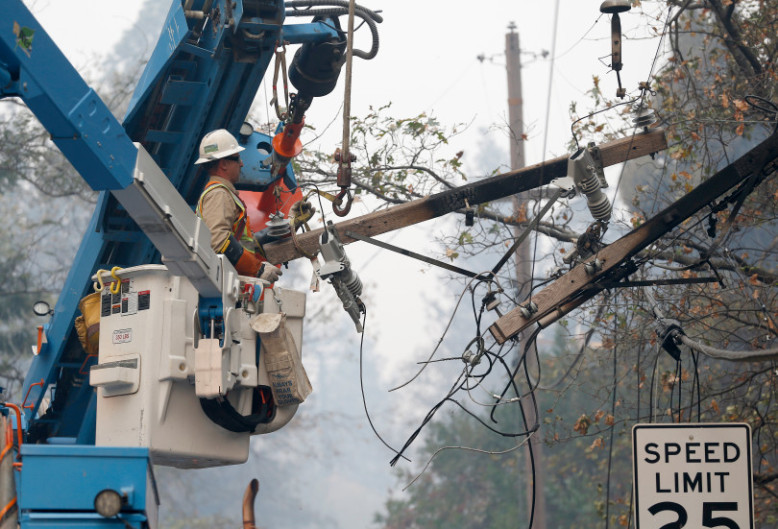 As it plunged swaths of California into darkness in an extreme measure to prevent wildfires this year, Pacific Gas and Electric Co. also began experimenting with a way to keep the lights on in some places: small Main Street strips where residents could still have places to eat, fill up on gas and receive other essential services.

During blackouts last month, PG&E used diesel-fueled generators the size of school buses to power parts of commercial areas in four small towns: Calistoga and Angwin in Napa County, Grass Valley in Nevada County, and Placerville in El Dorado County. Its generators also powered parts of Calistoga and Angwin during last week’s outages, but the company said it ended up not needing to turn them on in the other two locations as it scaled back the recent shutoff plan.

The goal was to create temporary microgrids that allowed parts of those communities to continue using electricity even as areas around them could not. It’s part of a broader strategy from PG&E to contain the scope of its power shutoffs, a goal that has become increasingly urgent as the company faces pressure from state leaders to refrain from making blackouts a new way of life for millions of Californians every summer and fall.

PG&E says it hopes to set up 40 such microgrids over the coming years in areas subject to frequent planned outages.

Calistoga, which was blacked out multiple times by PG&E, welcomed the generators. The town core is not in a high fire-threat area, though its outskirts are and power lines serving it do run through fire-prone terrain. PG&E realized it could keep the lights on in the tourist-heavy downtown by connecting a local substation to diesel generators.

“We’re happy to be a guinea pig for this project,” Mayor Chris Canning said on the second day of a pre-emptive outage last week. “We are fortunate to have grocery stores, restaurants and coffee shops powered.”

After its equipment started a series of major disasters in recent years — including the deadliest and most destructive wildfire in state history — PG&E says it needs to turn off power lines when windy and dry conditions make them susceptible to igniting more blazes. But the company has been widely criticized for the way it rolled out its largest and most widespread outages, which affected an estimated 2.8 million people at their peak.

Climate change has dramatically altered the fire risk PG&E’s electrical system faces, company leaders say, so they view blackouts as a necessary tool while they make other changes like installing more resilient poles and wires, burying some lines underground and installing devices that allow them to limit the shutoffs to a smaller portion of the grid.

There are some negatives to the microgrids. Diesel — a planet-warming fossil fuel — was necessary to try out the temporary microgrids this year, according to PG&E. But Quinn Nakayama, the company’s director of grid innovation, said he hopes to use other fuels in the future.

“It’s got to actually work on our system. ... I’ll take just about anything over diesel.”

Nakayama said that by the end of the year, PG&E will be seeking technological options for microgrids in future power shutoffs.

“To the extent that the market comes back with a unicorn, I’ll take the unicorn,” he said.

Switching to PG&E’s temporary microgrid takes time, and the installations have had hiccups. During October’s first outage, PG&E said, it took up to 10 hours to get Angwin up and running. It initially misdirected power to Pacific Union College, which did not need it since it has its own plant. Going off the grid took three hours or less in the last three blackouts for Angwin and Calistoga, according to PG&E. Switching back on the other end usually takes an hour or less.

Before the mass blackouts, PG&E partnered with the college to set up a permanent installation on its ball field: a mobile generator on a big-rig truck that powers a fire station, post office, bank, dental office, medical building and student apartment building during outages.

“It softens the impact because you do have essential services open,” said Dale Withers, facility director for the college.

PG&E is involved with another microgrid project at the local airport in Humboldt County that should launch by the end of next year, according to the company.