Gov. Gavin Newsom's highest-profile proposed and enacted IT initiatives are still underway. But only one, RFI2, turned up in the governor's summary to his revised 2019-2020 budget proposal.
May 9, 2019 / By Theo Douglas 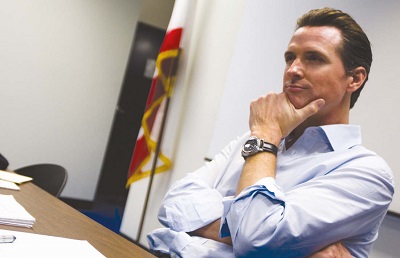 Gov. Gavin Newsom is thinking about the future of IT procurement. Photo: Flickr / Ani Thaniwalla

IT is partly to blame for a scaling back of a Medi-Cal expansion for undocumented young adults.

A broadband plan is expected later this month.

Gov. Gavin Newsom, considered by some to be the “tech governor” — or certainly tech-forward — delivered a revised proposed budget Thursday that was light on updates to key technology issues.

His proposed $209 billion 2019-2020 fiscal year budget arrived Jan. 11 amid a series of high-profile IT initiatives targeting procurement, innovation and the beleaguered Department of Motor Vehicles – and announced plans for a new 50-person Office of Digital Innovation and an innovation academy. In delivering the customary revision to the governor’s proposed budget, a projected increase to $213 billion, Newsom offered a document that indicated a further strengthening of the state’s financial position ahead of any economic slowdown. But few of the former San Francisco mayor’s most well-known tech proposals featured prominently during a news conference.

Asked for comment by Techwire, Assembly Republican Leader Marie Waldron of Escondido said via email that it “doesn’t appear that IT is the same priority in this version of the budget as it was in January.” Per the state Constitution, the Legislature must pass the budget by June 15.

• RFI2, Newsom’s new “flexible approach to procurement,” also known as Request for Innovative Ideas, did came up in the May Revision summary, though not in the governor’s remarks. The proposed revision includes a one-time $15 million increase from the General Fund to pay for an “innovation procurement sprint.” That would enable the California Department of Forestry and Fire Protection (Cal Fire) to “procure innovative solutions to combat the state’s wildfire crisis,” according to the budget summary — as spelled out in Newsom’s Jan. 8 Executive Order on the topic.

This new proposed funding, the summary said, will “enhance Cal Fire’s fire protection capabilities and increase the pace and scale of forest health and fire prevention activities.” The endeavor is already underway; the state held a pre-bid conference for vendors April 2, and the bid solicitation period closed April 26.

• IT is partially responsible for a “full-scope Medi-Cal expansion for undocumented young adults” being scaled back. The May Revision includes $98 million — $74.3 million from the General Fund – for “full-scope coverage” for eligible 19- to 25-year-olds “regardless of immigration status” starting no sooner than Jan. 1. The proposed expansion would cover about 90,000 people during its first year — nearly 75 percent of whom are already in the Medi-Cal system, according to the revision summary. However, the expansion appears to have been scaled back from $260 million in the governor’s January proposed budget. Newsom said the projected number of users had fallen, and the implementation date had been pushed back six months.

“Delayed, as I said, because of IT issues; and population numbers have been adjusted based upon Pew (Research Center) and their research and their estimates, in terms of the number of people that they think will access the program,” Newsom said. It’s unclear what IT issues may have emerged; Techwire will follow with coverage as events warrant.

• A broadband plan is on the way. Asked how he’ll support infrastructure after the state recently received a C- average grade on infrastructure from the American Society of Civil Engineers, Newsom said it would come through “a lot of one-time investment” and a lot of “significant” investment.

“I was going to introduce the five-year capital plan today. I purposely held off for two reasons. Full disclosure, my broadband plan was not impressive. And No. 2, I did not want it to get lost because I think it deserves a completely separate focus. Know that we will have a detailed, comprehensive response to that question, and it’s all but done with the broadband components ... as the one piece that needs to be tweaked,” Newsom said. He said his five-year capital plan could be ready next week or the week of May 20.