Two apartment complexes in Sacramento are getting early access to a car-sharing program that’s starting small in largely disadvantaged neighborhoods, with plans to spread to other areas.
Nov 2, 2018 / By Skip Descant 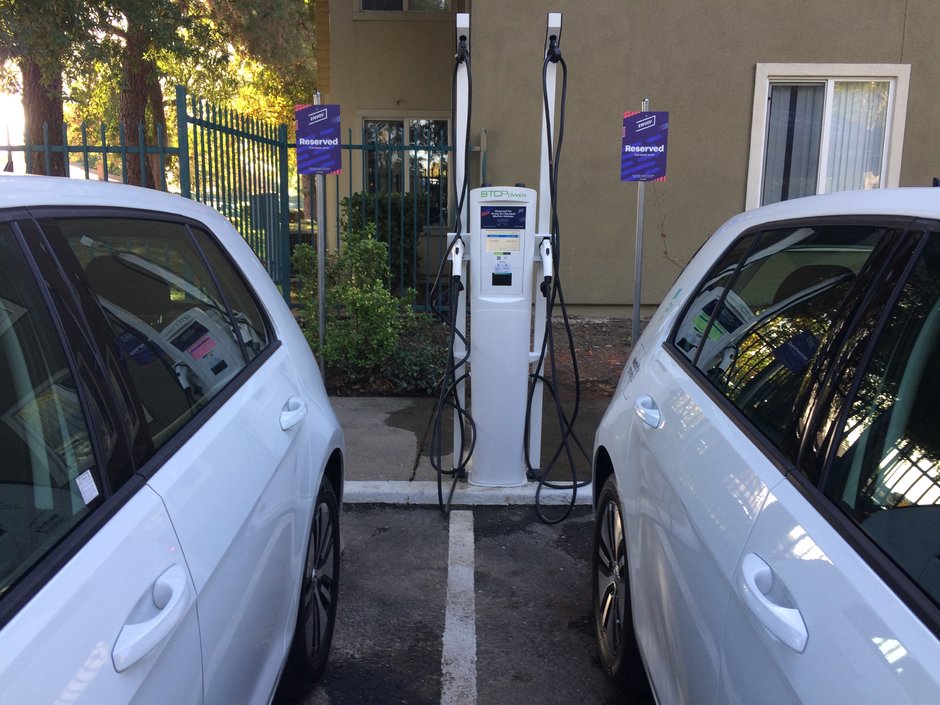 Two apartment complexes in Sacramento are getting early access to a car-sharing program that’s starting small in largely disadvantaged neighborhoods, with plans to spread to other areas. The vehicles are battery-electric powered, introducing the emission-free Volkswagen e-Golf EVs to drivers who may have never set foot in an electric car.

“The green revolution is not just for some people. It’s for everyone,” Sacramento Mayor Darrell Steinberg told a crowd Thursday in the Meadowview neighborhood of south Sacramento.

The event kicked off an initiative known as Sac-to-Zero, a move to introduce zero emissions vehicles into California’s capital city via several car-sharing and electric shuttle programs. The effort is being largely led and funded by Electrify America, a Virginia-based company formed in the wake of the 2016 Volkswagen emissions tampering scandal. The company plans to invest $2 billion in the U.S. over the next 10 years to incentivize the adoption of electric vehicles. Electrify America will invest some $44 million in Sacramento.

The electric cars are provided via Envoy Technologies, which deploys electric vehicles to developments like apartment buildings, hotels and other locations to provide a short-term rentable electric car.

“We are changing the way people own cars," said Aric Ohana, co-founder of Envoy Technologies. “We have all these different mobility solutions that are at the forefront, like Jump Bike, Uber, Lyft, all these different reasons to not own cars. And when we put cars at properties like this, all of a sudden the dynamic of owning a car completely changes.”

For starters, only a dozen or so cars have been introduced to two Sacramento apartment complex locations, with plans for full deployment across 70 locations in the next three months, said Ori Sagie, also a co-founder of Envoy.

The cars rent for $.15 a minute or $9 an hour. The cost is all-inclusive, which means drivers do not have to pay for charging them, insurance or other incidentals. The company is installing charging ports at the different apartment locations. The cars can be reserved in advance and rented for up to three-hour windows.

In the first quarter of 2019, Electrify America will launch what’s known as GIG Car Share, a “free-floating” car-share platform, powered by AAA, that will place some 260 entirely electric cars in Sacramento, available for rent. The cars will be sitting in parking spaces on the street and at other locations. Drivers will rent them via the Gig app, not unlike renting one of the hundreds of red Jump Bikes found all across Sacramento.