Members of the city committee also called for input from the public during the process.
Jan 30 / By Tribune News Service 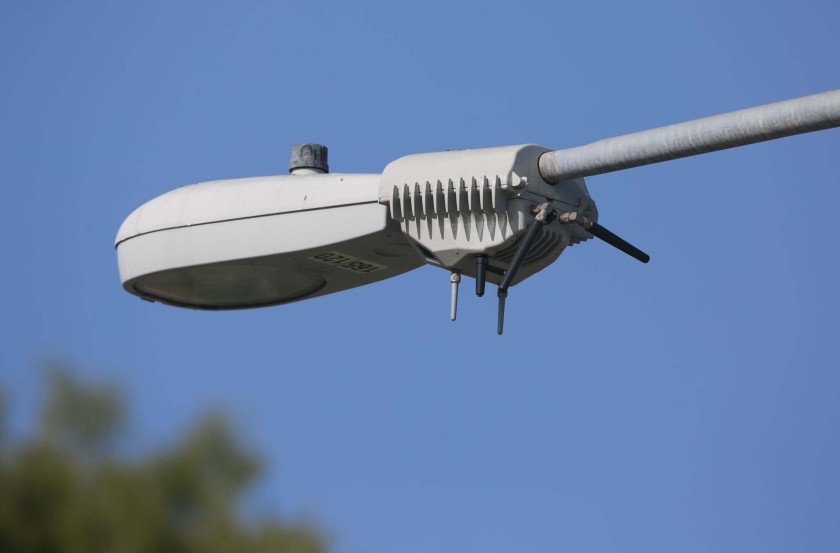 The city of San Diego has installed thousands of “smart street lamps” that include an array of sensors, including video and audio, used by law enforcement and other city entities.

A San Diego city committee on Tuesday unanimously rejected a policy laying out rules for the use of data collected by thousands of local high-tech streetlight cameras, choosing instead to look for something that goes further to address public concerns about surveillance technologies.

The Public Safety & Livable Neighborhoods Committee, which includes four City Council members, asked for a broad ordinance addressing all public surveillance technology in the city. They also want public input in the process.

Councilwoman and Committee Chair Monica Montgomery, who suggested that the city seek an ordinance over a policy, said the committee should know more about all the city’s surveillance tools before approving rules that would govern data from sensors on the street lights.

She pointed to news reports regarding other sorts of surveillance technology surfacing in the region, including facial recognition software and drones.

“Too many of these programs are moving forward without public conversation, careful consideration of the costs and benefits, or adequate policies in place to prevent misuse and protect rights,” Montgomery said.

At the center of the issue are San Diego’s so-called smart street lights, which include sensors equipped with cameras, microphones and other technology. The sensors capture a variety of information about, for example, pedestrian and vehicle movements, parking availability, temperature and humidity. Images are turned into data.

The city is running the Smart Street Lights Program through its Sustainability Department.

However, police can also access the images under what the department has said are narrow guidelines it has set for itself. For example, the footage can only be accessed to solve serious crimes such as homicide. In the last 17 months or so, police have downloaded the footage 246 times.

Police Chief David Nisleit told the committee Tuesday that the department uses them as a “reactive tool,” and is not monitoring any live feed.

City authorities have said the cameras do not pan, tilt or zoom, and the audio is not turned on. They are not equipped with facial recognition technology or automatic license plate readers.

There are 3,200 smart street lights installed around the city. Another 1,000 had been slated to be put in later this year, but that has since been put on hold.

In 2016, the Smart Street Light Program was sold to the City Council and public as energy-saving LED lights that could save the city up to $125,000 a month.

It was revealed later that the light poles also included sensors and cameras equipped the gather data. In August 2018, police started accessing the camera footage to help solve serious crimes, such as murder.

The city’s failure to disclose sooner that the smart street lights allowed for electronic surveillance stoked fear among some members of the public that data from the sensors — including the video footage — might be misused against segments of the population, including communities of color. Critics demanded full transparency and better oversight of the program.

On Wednesday, the committee took up the issue, with a proposal to codify a policy governing access and use of the camera data. Montgomery countered with the request for an ordinance that would cover all public surveillance technology, something with “strong mechanisms for transparency, accountability, and oversight.”

She also said she would form a “community working group” to add input on surveillance concerns, as well as look to other jurisdictions with similar ordinances.

Other committee members also voiced concern. Councilwoman Vivian Moreno, who joined the City Council after the program was approved, said confusion over the technical capabilities of the smart street lights was “caused by the city not being transparent from the outset.” She also suggested bringing in an outside party to review what the smart street lights can do and look for cybersecurity vulnerabilities.

The committee’s decision to pursue an ordinance targeting all surveillance technology was good news to those who have been raising red flags.

“It looks like they understood they need a good process for evaluating and acquiring this technology more broadly than a Band-Aid for one type of technology,” said Lilly Irani, an associate professor at UC San Diego who specializes in the cultural politics in technology.

San Diego has faced criticism previously over its handling of some technologies, especially those used by police.

When ShotSpotter, a gunshot detection system, was installed in four southeastern San Diego neighborhoods in 2016, community members complained there had been little to no community input on the matter.

It’s been an issue regionally as well. In Carlsbad in 2017, community members expressed concern when officials installed more than 50 license-plate readers across the city.