The emergency operations center was fully activated during the Great Southern California Shakeout and personnel were tested for ‘stress inoculation’ as information poured into the EOC from users with mobile apps reporting on fires and evacuations.
Nov 21, 2018 / By Jim McKay 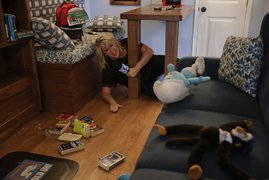 TV reporter Wendy Burch takes cover under a table in a Big Shaker simulating a 6.8 magnitude earthquake Thursday, Oct. 18, 2018, in Los Angeles. Millions of people around the world are practicing the basic earthquake safety skill of "drop, cover and hold on." Thursday marks the 10th anniversary of the "Great ShakeOut" earthquake drills that originated in Southern California. ( AP/Jae C. Hong )

The Great Southern California Shakeout in October was a great opportunity to refresh the minds of millions on the constant threat of earthquake in the region. For the Santa Ana Unified School District, it was also a way to practice interoperability and test a new communication system.

The use of the Maxxess Ambit private, two-way messaging and intel system made the annual event more realistic than in years past because of the large amount of data that was being funneled to the district’s EOC, which had to be analyzed in real time.

Ambit is described as a human sensor interface that delivers an overall picture and view of a scenario via remote communications that improves situational awareness. It can be used several different ways. It consists of the mobile app used in the field and the dashboard, used in a command center or EOC, on which users receive all the data from the mobile apps and can see the users’ locations.

The dashboard has a running list of every message that is sent by a user on a mobile app and a map with pins showing the location of all the users in the field.

In Santa Ana, personnel in the EOC were getting eyewitness accounts of simulated events around the district, including two school buildings on fire, one building evacuated twice, and one building that needed generators to restore power.

It was a full EOC activation with school district employees and a handful of district police officers. “For me, it was of great value as a training tool in the EOC because it has this live data feed that is continuous or potentially continuous, depending on the scope of the emergency and the number of users,” said Sgt. Kevin Phillips of the Santa Ana School District Police Department.

Phillips used Ambit as a tool to help train Santa Ana staff in “stress inoculation. You have this large amount of data being input into the EOC and one of the challenges is to cipher through that as it’s coming across on the screen and determine what data is relevant.”

Phillips said the large influx of data was purposely engineered that way. Users in the field were asked to send relevant and non-relevant data through to the EOC so those in the EOC could get a real-time experience of what it’s like during a real disaster.

“I wanted to see the continuous flow, and my challenge was to the people in the EOC to take all that information and the maps [generated by the mobile devices in the field] and develop an incident action plan on how you’re going to deal with that piece of information,” Phillips said.

The EOC personnel were divided into four sections, including intel, logistics, finance and operations, and each section had a focus and was seeking certain specific data.

“The data came in like it was real,” said Camille Boden, executive director of risk management for the Santa Ana School District. “Some of the sections did really well and one didn’t do so well.”

The data was used to evacuate students, order buses and send generators. The one section that struggled should have been more worried about reunification, Boden said.

The district is moving toward deploying the system for daily use for issues such as non-authorized people on campus or any other safety issues.