Olli will be driving under 5 mph, but has the capability to drive up to 25 mph. The shuttles can comfortably seat eight people, and each vehicle is accompanied by an attendant who oversees its autonomous operations with the ability to take over manual control or pull an emergency brake.
Aug 8, 2019 / By Tribune News Service 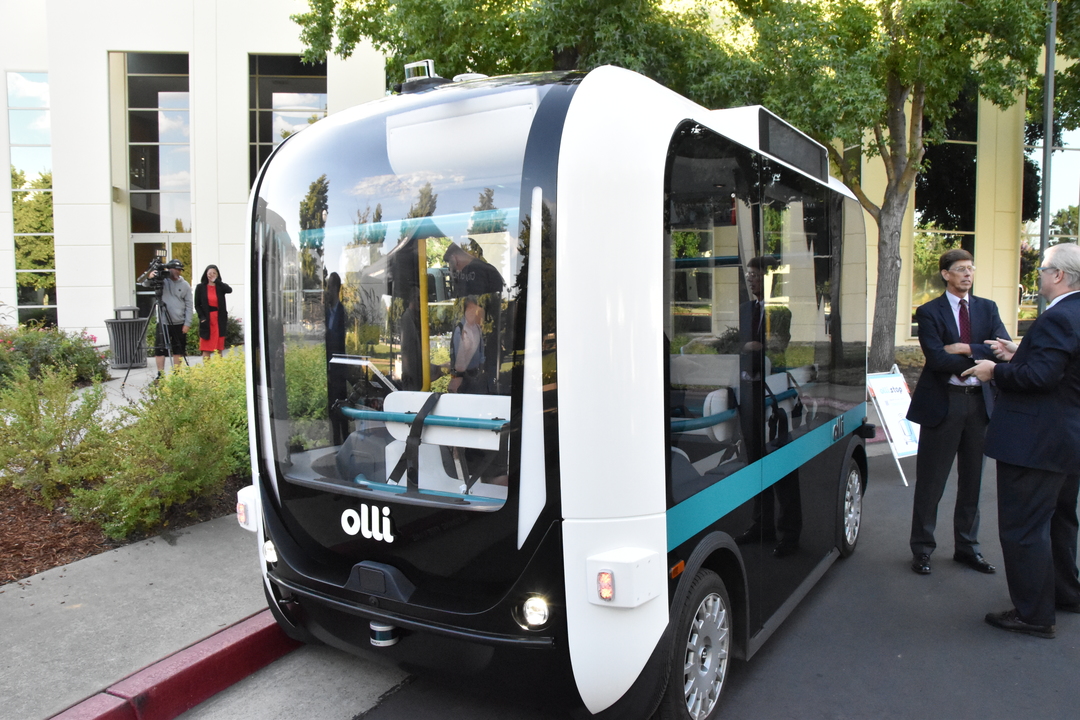 For the next three months, employees at a business park in Rancho Cordova will be getting rides to their cars by way of some of the most advanced transportation technology available.

Olli, a 3-D-printed, electric, autonomous shuttle made by Arizona-based manufacturing company Local Motors, made its debut Wednesday morning at the White Rock Corporate Campus to showcase its technological capabilities.

The self-driving vehicles operate on a pre-programmed route around the campus’ parking lots and will be shuttling employees on the 518,156 square-foot campus to and from their cars and their offices.

Olli shuttles appeared at California State University at Sacramento in January for a similar 90-day test run, collecting data and transporting students around campus. More recently, the electric vehicles were at Cal Expo for the California State Fair.

Rancho Cordova’s time with Olli will be its first application in a business setting.

“We’re excited to really expand on those additional use cases,” said Local Motors regional account manager Taylor Gygi. “This is the first business complex that Local Motors has done with the Olli shuttles, really focused on employee transit.”

The electric vehicles can drive for 40 miles on a single charge and can recharge at stations on the campus in 60 to 90 minutes, Gygi said. Olli will be driving under 5 mph, but has the capability to drive up to 25 mph. The shuttle can comfortably seat eight people and each is accompanied by an attendant who oversees the vehicle’s autonomous operations with the ability to take over manual control or pull an emergency brake.

The autonomous vehicle will automatically stop on its own if an object crosses its path using a series of cameras, GPS technology, radar and lidar — a radar-like system that uses reflected lasers for positioning.

But you don’t have to work at White Rock to experience a ride on Olli. Gygi said anyone who is interested first must sign a waiver, then can park their cars at Rancho Cordova City Hall across the street from the business park, walk over and get in to check it out.

“We’re really interested in getting the local residents of Rancho Cordova — get their feedback on the vehicle, how they feel about it, overall comfort, and ideally, additional applications throughout the region,” Gygi said. Local Motors will be compiling data from the project after the three-month test period.

“We’ve got great light rail not far from here, we’ve got a great regular transportation system, but we’re looking for options ...” Sander said. “If we could provide (commuters) a better option for getting to work that improves their quality of life, we’re very interested in that.”

The White Rock Olli project was funded by a $90,000 grant from the Sacramento Area Council of Governments and $10,000 provided by the city of Rancho Cordova.

Local Motors has deployed Olli shuttles in Australia, South Korea and Germany, plus a multitude of U.S. sites.

More information about Olli and links to waiver forms are available online.