Since the pandemic took hold, a Silicon Valley County, its school districts and a technology provider have used data to better understand where broadband is needed and focus their deployment.
Feb 5 / By John Frith 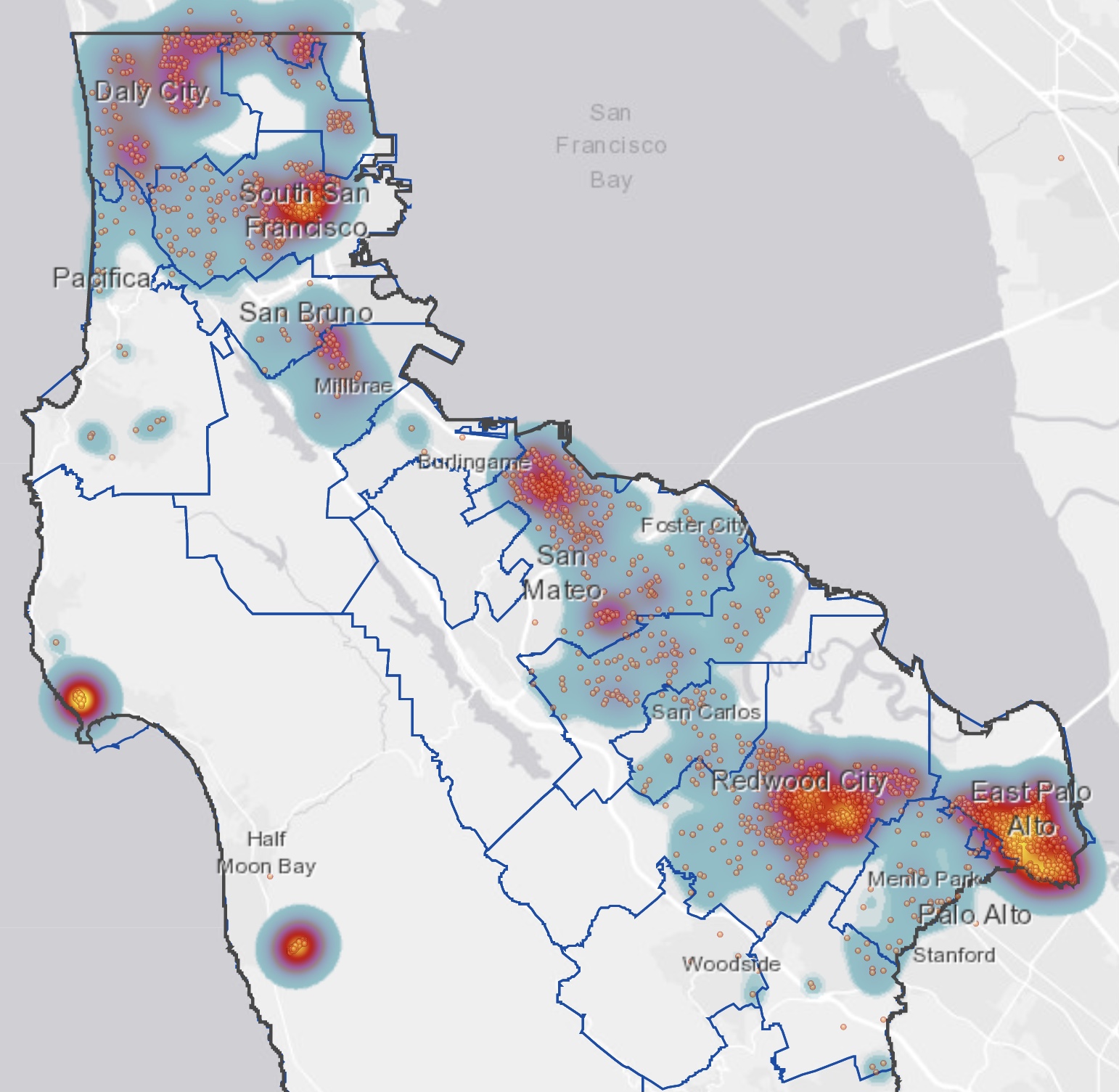 This heat map shows San Mateo County areas of broadband need that were identified by Kaizen.

Officials at one Silicon Valley county, its school districts and at a cloud technology company have used anonymized student data to do a better job of targeting broadband delivery during the pandemic.

The entities had worked together prior to COVID-19, but their collaboration deepened as families in San Mateo County scrambled to work and educate their children from home. County leaders had for several years been using technology to bridge the digital divide and promote digital inclusion — but they and school officials quickly realized as distance learning took effect that, for county residents without Internet access, more needed to be done.

The county partnered late last spring with San Francisco-based cloud tech firm Kaizen Technology Partners, to develop a program that would bring strong broadband connections to families in rural and low-income areas. Using $6.3 million in federal Coronavirus Aid, Relief, and Economic Security (CARES) Act funding allocated by the county Board of Supervisors, approximately 4,000 students out of 10,000 identified as at-risk — and their families — are now able to fully participate in remote learning.

Local agencies hope to continue expanding access to other communities in the future so students, seniors, low-income individuals and businesses have dependable Internet access — which they say is more important than ever.

Jon Walton, the county’s chief information officer, said the county had installed Wi-Fi access at about 100 different sites over the years, mainly at places people gathered like parks and community centers. But stay-at-home orders meant people couldn’t congregate in those spaces, so the county and school officials from its 24 districts and the superintendent’s office began meeting to figure out what to do. Because the county was already working with Kaizen on an Amazon Web Services project, they brought the company on board to help with the Internet access problem as well.

“We were struggling to understand where the need was the greatest,” he said. “$6 million goes quickly over the county’s 600 square miles, so we had to focus on how to spend the money efficiently. We knew that if we could get data from the districts about where underprivileged students lived, we could use that as an indicator for where there’s a problem.”

Arthine Cossey van Duyne, Kaizen’s public sector lead, said the company obtained data from the districts over a six-week period and entered it into a GIS dashboard that also had data points about where cell towers were, how strong the signal was, and what foliage in the area was like.

“We could then look at a heat map and see where there seemed to be a density of locations. We identified four school districts where the pilot program would be — Ravenswood City Elementary, Sequoia Union High School, La Honda-Pescadero Unified and Redwood City. By early September, we had an informatic layer to share with the county about where we wanted to go,” she said.

“In La Honda, the county purchased mobile connectivity equipment on a truck so you could drive it from place to place. They took it out to ranches and the farmworkers’ children could set up there to access education. It was super innovative,” she said.

Magee said the project’s first phase, from roughly April to Labor Day, went smoothly because there was time to iron out problems along the way, and teachers and families are reporting better success in school than last year. The second phase, which provided free Wi-Fi in three times more locations in the north end of the county, was completed by Dec. 31, in just six weeks because CARES Act funding became available in the fall and had to be spent by year’s end. Magee said districts have not yet evaluated the improvement in learning, but any problems caused by the fast turnaround period were resolved satisfactorily.

Similar efforts are underway in San Jose and Oakland, Walton said. Cossey van Duyne pointed out that while the county’s program was primarily aimed at helping about 4,000 students, probably three or four times that number of people have benefited by extension.

Walton and Magee both indicated they’d like to see the program expanded in the county, and elsewhere. Walton said a COVID-19 recovery advisory committee is exploring ideas to do so, because everyone needs reliable Internet access today; and the Board of Supervisors seems supportive of providing additional funding.

“For me as county superintendent, I have a vision that we will become a fully connected county. This impacts every resident – it makes us all better and stronger. Our goal is to keep going. What we have to do is figure out a way to structure some permanent funding that supports it,” Magee said.