California and its capital are testing out new digital license plates that use the same computer technology as Kindle eBook readers.
May 30, 2018 / By Tribune News Service 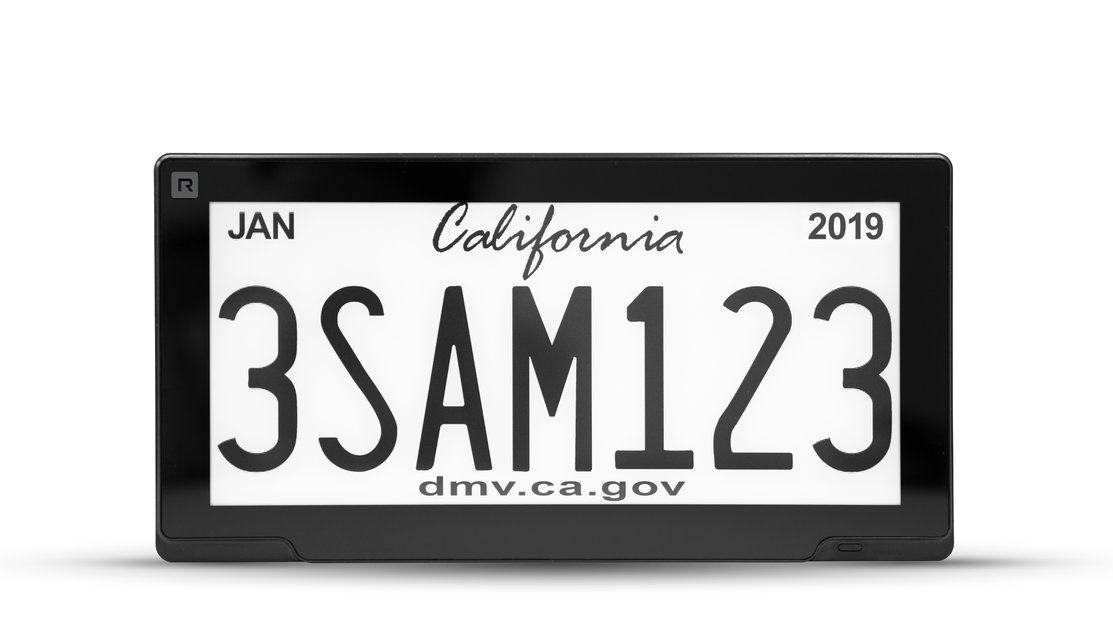 A digital license plate from Reviver Auto, which the state of California and the city of Sacramento are testing.

California’s dramatic new license plate is hitting the streets — a digital display board that allows changeable messages controlled by the driver or remotely by fleet managers.

The new plates use the same computer technology as Kindle eBook readers, along with a wireless communication system.

They come with their own computer chips and battery.

Motorists who choose to buy the plate can register their vehicles electronically and eliminate the need to physically stick tags on their plates each year. They also may be able to display personal messages — if the DMV decides to allow that.

If the car is stolen, the plate's manufacturer says the plate can tell the owner and police exactly where the car is or at least where the license plate is if it has been detached.

California, which has been quietly prepping its roll-out this year, is the first state to try out the new plates.

The state Department of Motor Vehicles is conducting a pilot project with a Bay Area company, Reviver Auto, which makes the plate and is about to begin marketing it for sale at auto dealerships.

Last week, Sacramento became the first city to agree to test the plates, taking a shipment of 24 plates for its in-house vehicle fleet.

The technology comes with a high price, however, and has already prompted questions about privacy and safety.

Dealerships are expected to sell the plates for $699, not including installation costs. Users also must pay a monthly fee of about $7. The plates are not available through the DMV.

Some drivers are questioning whether the device's communications system could allow the state, the police or private companies to track a driver's movements.

In a recent blog posting, Alex Roy, an editor at The Drive website, raised those and other questions.

"What little privacy we have left is annihilated," he wrote. "This makes sense for fleet management. For my personal car? No thanks."

Neville Boston, founder of Reviver Auto, said he expects initial interest to come from companies for their vehicle fleets.

Some businesses will use them as mini-billboards to advertise their products or services, he said, but will be able to do so only when the vehicle is stopped. The license plate number will still appear on the screen when messages pop up, but it will be smaller and tucked into the upper right corner of the screen.

Boston said the devices are available, though, for individual private users who want to be on the cutting edge of new technology.

DMV officials declined last week to answer Bee questions about the state’s plans for the new plates, saying they are just testing the new product.

"The purpose of the pilot is to identify and detail potential benefits, so we are still in the evaluation phase and won’t make any determinations until the pilot concludes," a spokesman wrote in an email to The Bee.

The state legislature gave the DMV the go-ahead to explore the new devices several years ago and ordered the department to report back by July 2020 about how the plates are performing.

Under the pilot program rules, the state can allow up to one-half of 1 percent of the state's 35 million vehicles — or about 175,000 vehicles — to use the plates during the test period.

DMV officials last week said there are only 116 cars in the state with digital plates in use so far. But Reviver Auto expects that number to jump into the thousands this year as auto dealerships begin selling them and companies and consumers read about them.

The city of Sacramento is about to begin testing the devices as well, in cooperation with Reviver Auto, on some fleet cars.

The city's innovation officer, Louis Stewart, said the city took shipment last week of 24 new Chevy Volts with the electronic plates. It got the plates at no cost from Reviver. City officials want to see whether the plates allow them to keep track of fleet vehicles more efficiently and inexpensively via electronic messaging.

Stewart said the city likely also will experiment with the plates as message boards. When a car is stopped, Stewart said, the license can display programmed public service messages, such as street closure notifications, an ad for a city service, an Amber or Silver Alert warning or some other emergency alert.

Stewart said city officials will talk first with labor representatives about assurances that the city will not use the plate technology as a monitoring device on city employees.

The city sees the plates as a stepping stone, he said, along with an upcoming Verizon 5G Wi-Fi network, for the city to become a national testing ground for autonomous or driverless vehicles. The goal, he said, is to create cutting-edge jobs for city residents.

"We want to look at ourselves as a laboratory for a lot of these technology companies," Stewart said. "Come to test in Sacramento, come see how your product or service is viable.”