The working group will investigate a developing area of information technology thought to have considerable potential for both the public and private sectors.
Aug 5, 2019 / By Theo Douglas 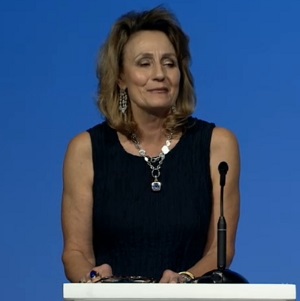 California GovOps Secretary Marybel Batjer presents at the Code for America Summit in Oakland on Wednesday.

State officials have announced the members and leadership of a new advisory group with significant oversight in a long-promising area of electronic ledger technology.

California Government Operations Agency (GovOps) Secretary Marybel Batjer on Friday announced the chair and members of the newly formed blockchain working group created by Assembly Bill 2658 in 2018. Authored by Assembly Majority Leader Ian Calderon, D-Whittier, who's the co-chairman of the California Legislative Technology and Innovation Caucus, the bill established the working group under GovOps. It’s tasked with researching and documenting blockchain’s potential uses, risks and benefits to state government and to business — and issuing a report to the Legislature by July 1, 2020.

“Blockchain is a unique, emerging technology, and I look forward to this group exploring its potential for the state,” Batjer said in a statement. Among the takeaways:

• Batjer named Camille Crittenden, executive director of the Center for Information Technology Research in the Interest of Society (CITRIS) and the Banatao Institute, as the group’s chair. The organization’s mission is to “create information technology solutions for society’s most pressing challenges,” according to its website. Batjer praised Crittenden’s “wealth of experience and knowledge about this topic” in a statement and said she’s “thrilled to have her lead this important effort.” Crittenden said she’s honored to lead the group, also in a statement.

“We want to look into applying the new information technology solutions in ways that are going to be useful and effective and fair. To the best of my knowledge right now, I don’t think it’s actively being applied in California government and that’s what we want to look into,” she told Techwire.

“I think it’s important for the state of California to, especially when it comes to technology, have a clear understanding what the benefits and potential risks of all these different technologies are, that are starting to come into play more and more in our daily lives,” Calderon said.

• Four state IT leaders are also members: Benjamin Bonte, CIO of the Department of Industrial Relations (DIR); Sergio Gutierrez, CIO for the California Environmental Protection Agency; Kem Musgrove, Franchise Tax Board CIO; and Amy Tong, state CIO and director of the California Department of Technology. Member Ted Ryan is the designee from the state Department of Finance.

• GovOps Undersecretary Julie Lee told Techwire the group members were selected in accordance with AB2658, with her agency working with the Judicial Council to identify three appointees with law backgrounds.

“We put an interest form up on our website and we got a lot of interest from that,” Lee said. “We also recruited from different parts of the industry that people in the agency were familiar with, and the governor’s office also did recruitment. I think we wanted to get a nice mix of people that were skeptics and neutral and people that were involved in it and had deep understanding of it.”

Asked why the group received such a healthy response from a diverse group of applicants, Lee said: “I think part of it is that this is something that Gov. Newsom is interested in, and I think people wanted to participate as a way of being able to serve in the Newsom administration, in a way.”

• The working group’s first meeting will be in September; a date and an agenda have not yet been released. However, Calderon said elections could be one area of exploration.

“I think voting digitally is absolutely where we need to go in the future, but techno is vulnerable in that it can be manipulated at times," Calderon said. "Perhaps blockchain is good technology that’s finally going to allow us to vote from our phones.”

• Gov. Gavin Newsom announced July 12 that Batjer would be leaving her post as GovOps secretary to become president of the California Public Utilities Commission (CPUC). Her last day at GovOps will be Aug. 15, and she’s expected to start as CPUC president the following day, said Lynda Gledhill, GovOps deputy secretary for communications. When that happens, Lee will fill in as acting secretary in addition to continuing as undersecretary, until Newsom appoints a new secretary.

“Marybel has big high heels to fill. The governor’s office is looking for a new agency secretary for us and I am very hopeful that they’ll find just a stellar person for us,” said Lee, who indicated she has been undersecretary for six months and will not apply for consideration as the next secretary.