State's Geoportal: First a Challenge, Then a Sprint

Leaders from the California Department of Technology explain how a comment made half in jest led to the rollout of a portal that could be a game-changer for government as well as individuals and industry.
Feb 26 / By Dennis Noone 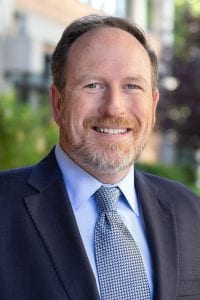 It was a casual, half-joking challenge that set the California Department of Technology (CDT) on a hurry-up path to its new California State Geoportal.

More than 200 people were in attendance at a Nov. 1 GIS conference at the headquarters of the California Environmental Protection Agency (CalEPA), including state technologists, geographers, researchers, top executives from CDT and Michael Wilkening, the governor’s special adviser on innovation and digital services. State Chief Information Officer Amy Tong and Chief Technology Innovation Officer Scott Gregory recounted in a recent Techwire interview how the events unfolded.

It started with an address to the conference by Jack Dangermond, founder and president of Esri, a pioneer and leader in the GIS industry.

Tong picked up the narrative: “This is the part that shows the human side of this: We’re literally at this Esri conference, and for Jack to come to the conference is a big deal … and he said, ‘The federal government has this (GIS) portal  and the state of California doesn’t have one,’ saying it as a fun thing. And then, an even more fun part, is he said the federal government pulled theirs together in two months. So I leaned over to Scott and said, ‘We can do it in less than two months, right?’”

Said Gregory: “What do you say to your boss? ‘Of course we can!’”

Thus began what Tong and Gregory dubbed “the Halloween-to-Christmas challenge.” A task force with members of numerous state government departments — CDT, CalEPA, the California Natural Resources Agency and others — was quickly assembled, and the spring began.

“The task force came together and delivered it two days early, on Dec. 23,” Gregory said. A big part of the success, Gregory said, was ensuring from the outset that multiple departments and agencies had buy-in: “That it wasn’t CDT saying, ‘We’re the ones doing it.’

“We’re here to collaborate and convene, and that’s a really good role for us. What you end up having is … well over 1,200 data sets now and a variety of applications that leverage that data, to start to get some meaning out of it.”

For Matthieu Denuelle, who works in Esri’s state government sales division, the technology was the easy part.

“Each department already had the technology deployed,” Denuelle told Techwire in an interview. “They were using it internally for their own processes; they just needed to turn on some functions that they hadn’t turned on, or start sharing a little differently from their data services, so that it could be harvested or linked to CDT’s portal. So in essence, the effort was a lot more in coordination with people than technology.”

Denuelle said the linchpin to the successful rollout was the backing from Wilkening and the governor’s office.

“They needed executive support to spend a little extra time to start thinking about their data as valuable outside their own agency,” Denuelle said. “That was the challenge, so once they got support from the governor’s office … to put it all together at CDT with Amy and Scott, then the job was done.”

Now that the Geoportal has been up and running for almost two months, the sprint hasn’t really stopped.

Tong said she and Wilkening “really wanted to use this opportunity to reinvigorate the GIS community, and to showcase all of the great work that the GIS community has already produced. And the reinvigoration — this is only the beginning. This is not one-and-done, thank you very much. This is only the beginning to generate that momentum. Along with the task force, we’re also going to reach out to the larger GIS community, and that also includes the locals.

Ultimately, the state wants the Geoportal and the state Data Portal to be used by not only government but also by residents and businesses.

“You can imagine the deep and rich demographic information we have, the taxation information we have,” Gregory said. “For running a marketing campaign or a business campaign or taking a product to market, there’s a lot of information that can be brought to bear. Health statistics, real estate — everything from how schools are performing to natural-disaster proclivity for that area — it goes on and on and on.”

As for staffing and other costs, Gregory said the price so far hasn’t been a big one.

“The platform that’s being leveraged and used is part of our existing (Esri) licensing schema, and that’s what we use to enable the Geoportal,” he said. “It’s a piece of software that comes with our existing licensing. We do plan on staffing up, just because the attention data’s been getting as of late. We look to be plussing up at least the data side of my organization — probably 30 to 40 percent. We’re growing it. I have approximately eight individuals that are data scientists and geographers.”

And although the Geoportal and Data Portal are up and running, Gregory said, there are ways for other companies to get in on the project.

“There are definitely opportunities in areas that we don’t have visibility in. For example, there are data sets that are important to the state, but the state is not the producer of that data — property data, assessor data. That is derived at the county level. … Combining all those together and edge-matching — that’s a challenge and that’s an area where industry could come in and help us by vending data to us. Things like that, where the state doesn’t necessarily have the authority to build and own and curate that data — we would definitely look for outside support.”