Eight months of preparation has culminated in the transition of leadership at Sacramento tech firm SymSoft: The founder and CEO is stepping back and letting the new CEO take the reins.
Aug 27, 2019 / By Dennis Noone 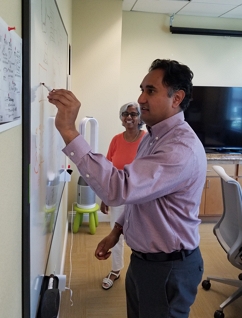 SymSoft's Bhavik Patel and Savita Farooqui drew a blueprint for the transition of leadership. ( Dennis Noone/Techwire )

For 13 years, Savita Farooqui has been the founder, president, CEO and driving force behind SymSoft Solutions, a small-business fixture in Sacramento-area IT circles and state government.

Farooqui has spent most of the past year grooming longtime staffer Patel to succeed her. The founder and the new CEO, interviewed together Tuesday at their Sacramento offices, told Techwire the transition has been methodical, gradual, deliberate and organic.

“We started slowly, instead of dumping everything on him at once,” Farooqui explained. Over the past eight months, she and Patel worked closely on rounding out his skills so he’d be ready when the time came for Farooqui to retire.

And now, with the transition complete, Farooqui soon won’t be coming to the office every day.

“Our vision will stay the same: ‘Creativity Through Collaboration,’” said Patel. “I’m ready to continue that vision, to keep growing the company, and to maintain our quality.”

The new CEO started with SymSoft 12 years ago — when the company was just a year old and consisted of Farooqui and husband Abdul Farooqui, who has succeeded Patel as SymSoft’s chief technology officer.

“Not counting Savita and Abdul, I was employee No. 2,” Patel said. The California State University Sacramento graduate began with SymSoft as a software engineer, then began climbing the ladder — senior software engineer, then technical lead, then solutions architect, then director of technology, and now CEO. The company’s growth has paralleled his own, going from a tiny enterprise to one that approaches $5 million in annual revenue and has about two-dozen employees.

SymSoft was in the news most recently for having successfully rolled out 11 state government websites, having done everything from design to infrastructure; and from user experience to training state workers to maintain and update the contents of their sites. And while SymSoft did follow certain templates and protocols in order to give the state sites a similar feel, customization is also part of what they do.

“That’s important, too,” Patel said. “Even in an organization like DGS (Department of General Services), which has different divisions and departments, even though I’m under the umbrella of DGS, I still want my facilities and asset management page to have its own particular feel. I want it to be my department.”

Patel, a native of Zambia, had relatives in Sacramento, where he moved directly from his homeland in 1999 to attend Sac State.

“My initial intention was, ‘I guess I’m just here for college, and I’ll move to Zambia once I’m done.’ I found a job … I realized the opportunity that this country could provide me that my country, Zambia, could not provide.

“I’ve now been in Sacramento longer than I had been in Zambia,” said Patel, 38.

“I’m grateful for technology,” he said. “About five years ago, I took an iPad back to Zambia and got my dad all Internet-connected there, and now we FaceTime every weekend, basically,” a ritual that includes Patel, his wife and their 3-year-old daughter.

Now that Patel has settled in as CEO and Farooqui has eased into the background, she says she’ll remain available for consultation as Patel needs — but she also plans to unplug for awhile. She’s planning some travel in October and beyond, and Patel says he’s ready to work without that safety net.

As for Farooqui, she won’t be going from running SymSoft to watching daytime TV.

“I’m exploring a number of options,” she said, some of which may have an entrepreneurial component.

“Can’t say too much now,” she said with a laugh. “There are multiple ideas that I’d like to work on. Which ones do I want to focus on? When I know that, then I’ll let you know.

“Bhavik has been instrumental to SymSoft’s success so far, from all aspects,” she said. “One of my friends describes Bhavik as ‘good in heart and good in mind.’ We try to — and we want to — establish connections. Going deeper than collaboration, we want to form connections — like connections between our customers and their customers.”

Farooqui and Patel discussed a shared dream: to open SymSoft Labs, an R&D studio of sorts where the company could innovate and go deeper into digital services and digital marketing.

Two future avenues of growth that Farooqui and Patel foresee are digital accessibility and digital marketing.

“AB 434 is, of course, very hot right now, and we see that continuing,” Patel said. “Digital service delivery from government is another area where we definitely need to focus on, as well.”

Farooqui noted that government use of technologies like chatbots, machine learning and artificial intelligence “is being accepted more and more, and it’s going to go more that way.”

What will change at SymSoft under the newly minted CEO’s tenure? That depends on who’s answering the question.

Farooqui: “It’s my personal opinion that if you ask Bhavik that same question next year, after Bhavik’s done it, he’ll have a very different answer.”

“Even if there’s change going to happen, it’ll be organic,” Patel said. Something slow and steady. “Even when I talked about growing the company, it’s not going to be 50 percent overnight.”

Patel plans to raise his own profile now that he’s running the show. He’s been joining Farooqui on her meetings with clients for the last eight months, gradually speaking up more as he took on a bigger presence and Farooqui yielded a bit.

Soon, he’ll be soloing. Is it daunting for a self-described introvert with a tech background (“I still love to code”) to suddenly be the face of SymSoft, meeting with DGS and CTD and other large state customers?

“We definitely want to grow,” he said. “We don’t want to stop growing. Savita, of course, has built a legacy, so I’m here to continue that legacy. We’re very, very strong with what we do right now — we want to continue that, to enhance that.”

Patel said SymSoft is, as always, open to working with other companies and will remain so. He prefers to be contacted by email.

As for Farooqui, she has books to read and gardening to attend to while she mulls what she’ll do next. And when she finally makes her decision, she said, it will have been made carefully, methodically, organically. And, she promised, Techwire readers will be among the first to know.