“My function as CIO is best summed up in two words: service and security,” Chief Chris Childs says. “When it comes to service, IT’s role is to reduce the amount of time our officers spend thinking about technology, in turn providing them more time to spend serving the public. Regarding security, the department takes the protection of the public’s personal identifying information very seriously.”
Nov 18 / By News Staff 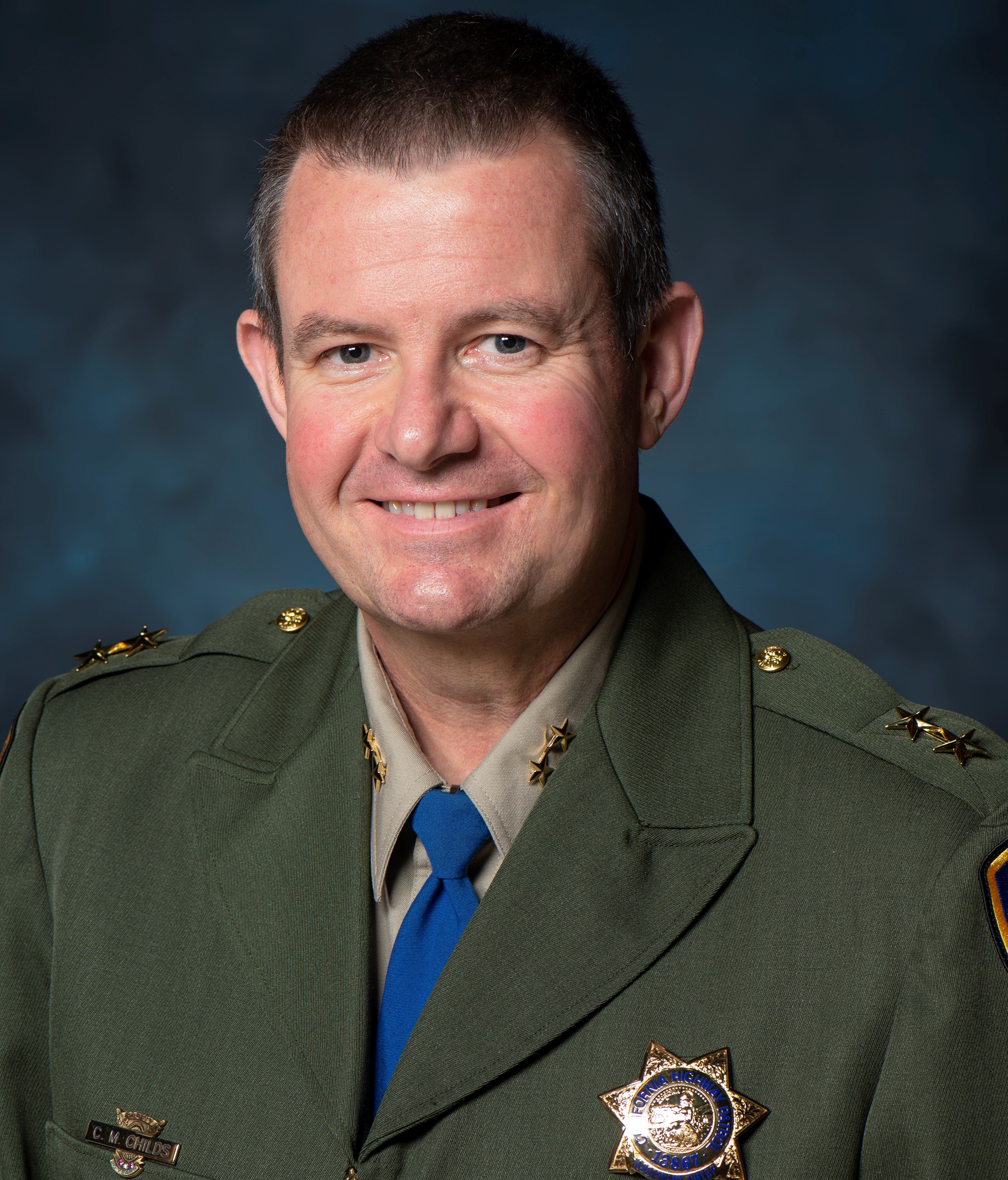 As part of Techwire’s ongoing efforts to help connect readers with state agencies, their IT plans and initiatives, here’s the latest in our periodic series of interviews with departmental IT leaders.

Chief Chris Childs of the California Highway Patrol took the reins as the department’s chief information officer on July 1 — in the teeth of a pandemic, social unrest in the state capital, and a reeling state economy. He runs an IT division with a budget just under $100 million and, like most other state agencies, is having to do more with less as the state weathers a pandemic-fueled economic downturn.

Childs has been with the CHP in a variety of positions in his 26-plus years with the agency, most recently as assistant chief in the Enforcement and Planning Division. In his new role, he oversees the Information Management Division and has continued working at CHP headquarters in Sacramento. In addition to overseeing CHP’s telecommunications operations, Childs will be responsible for maintaining the IT that the department uses statewide — communications for all CHP commands, the CHP’s mobile fleet, and 24 communications centers statewide. He also will oversee CHP’s Computer Crimes Investigations Unit, which investigates computer crimes involving state IT resources.

Techwire: As the relatively new CIO of your organization, what has the learning curve been like for you, coming from field operations and into the vastly different world of technology?

Childs: The diverse work assignments I have had throughout my 26-year career with the California Highway Patrol have helped to prepare me for my role as the department’s chief information officer. The connection between field and technology was made early on in my career with the CHP. Between 1998 and 2003, I was assigned as an investigator with Golden Gate Division’s Multidisciplinary Accident Investigation Team (MAIT), which uses multiple technology platforms to conduct in-depth investigations and analyses of major traffic collisions throughout the state.

Prior to taking over command of the CHP’s Information Management Division (IMD), I served as an assistant chief in the Enforcement Planning Division (EPD). During my tenure at EPD, I spent more than a year as the department’s representative, helping to safely integrate the state’s burgeoning Autonomous Vehicle (AV) industry onto California’s roadways.

Another key to successfully transitioning to this new role is surrounding myself with brilliant information technology professionals who are dedicated to the department’s mission and public service.

Techwire: How do you describe your role as CIO in two or three sentences?

Childs: My function as CIO is best summed up in two words: service and security. When it comes to service, IT’s role is to reduce the amount of time our officers spend thinking about technology, in turn providing them more time to spend serving the public. Regarding security, the department takes the protection of the public’s personal identifying information very seriously.

Techwire: What’s the status of the CHP’s strategic plan for IT? Do you envision changing any priorities or objectives?

CHP’s Strategic Plan provides the framework for accomplishing that mission with four primary strategic goals. These goals are designed to make California safer, further enhance trust within the communities we serve, anticipate and respond to emerging law enforcement needs, and to always strive for ways to improve our organization, both internally and externally.

Our priorities include assisting allied agencies and providing superior service to the public. Looking forward, among IT’s long-term goals is to make more of our services available to the public online.

Techwire: What big initiatives or projects are coming from the department? What sorts of RFPs/RFIs should we be watching for in the next six to 12 months?

Childs: The department is in the process of rolling out our new Wireless Mobile Video/Audio Recording System (WMVARS). The pilot project is being conducted in two field offices, East Sacramento and Placerville, and will eventually be rolled out statewide. The WMVARS will replace a system that is functional, but aging. The multi-year project comes with a $69 million price tag, but it will improve the level of transparency and service provided by CHP.

Another project on the horizon is an update to the departmentally created crash reporting system, Crash Manager, which will enable CHP to capture the more than 200 data elements on a crash report (CHP 555). The CHP 555 is a form used by law enforcement agencies throughout California for documenting crashes. The update includes the ability to capture information about autonomous vehicles as they become more prevalent on the state’s roadways.

Techwire: Your predecessor as CHP’s CIO, retired Chief Scott Howland, developed a fairly high profile in the IT community, with speaking engagements and frequent interviews. Do you envision taking on a similar level of visibility once you settle in, or is your personal style different? What should vendors expect in terms of your visibility and accessibility?

Childs: I envision maintaining a similar level of visibility as my predecessor. I anticipate taking on speaking engagements, teaching classes, and sitting on many of the same boards Scott was on. I also intend to fill his shoes by maintaining a public presence in the IT community and representing Commissioner Warren Stanley and the California Highway Patrol.

Ultimately, my goal as the department’s CIO is to do all I can to promote the unique services CHP has to offer the community. I want IMD to run smoothly and to take care of the people here, so that they can take care of the people on the road. At the end of the day, if IMD is doing its job correctly, our efforts go largely unnoticed and CHP’s service to our communities continues unimpeded.

Techwire: How many employees are in CHP’s IT organization? Is it growing?

Childs: The CHP has 220 IT professionals. This includes the following classifications: IT technicians; IT associates; IT specialists I, II and III; IT supervisors I and II; and IT managers I and II.

Techwire: What is your estimated IT budget? What is the department’s approximate overall budget?

Childs: The IT budget for fiscal year 2021 is approximately $92.5 million, and the department’s overall budget is $2.7 billion.

Techwire: How do you prefer to be contacted by vendors? What should they know about you before they reach out?

Childs: Calling the main line for the Information Management Division, (916) 843-4000, is the best way for vendors to reach out.

While I enjoy talking about technology, as CIO my calendar is extremely full, and I am not able to spend as much time as I would like with everyone who reaches out. Additionally, there is a process in place for doing business with state agencies. So, knowing how to do business with the state of California before reaching out is extremely beneficial for any business or vendor. That information is available on the Department of General Services’ website.

Techwire: As you settle into your new technology role, do you have a “digital hero,” either in the public or the private sector?

Childs: While I enjoy watching the moves California’s technology giants make, I am also keenly aware of the new and developing advances from other players in this tech space. I’ve watched with great interest the careers of Chris Urmson, as he has been an early pioneer in the AV industry and now leads Aurora, and Mark Rosekind of Zoox as the former administrator of the National Highway Traffic Safety Administration, who is now serving as their Chief safety innovation officer, bringing a truly safety-minded approach to this transportation industry-changing future.

Techwire: In your CHP tenure before being named CIO, what project or achievement are you most proud of?

Childs: During one fateful night October of 2017, a handful of wildfires broke out across Sonoma and Napa counties. What followed was a massive effort to evacuate entire cities. CHP worked closely with our allied agency partners to go door to door, personally notifying those in danger to flee to places of safety. At the same time, dozens of residents in the mountainous areas around Napa Valley became trapped at the ends of several one-way roads. CHP’s Air Operations officers put themselves in harm’s way and literally pulled people to safety, one by one, to minimize the loss of life. Following that harrowing night, our officers stood as sentinels to ensure the public’s livestock and property were protected as crews battled the blaze and critical infrastructure was restored. Watching the entire public safety system work tirelessly and as a single unit was amazing, and knowing I took part in those efforts was humbling.

Techwire: In your previous roles with the department, have you dealt with procurement/purchasing? If not, what’s been the biggest surprise as you navigate that part of your job?

Childs: One of the biggest eye-openers was the level of oversight both within the department and among other state agencies, which ensures we remain compliant with regulations and statues I didn’t even know existed before I took this job.

Familiarizing myself with the Statewide Information Management Manual (SIMM) is crucial for my success as a CIO. There are literally procedures for just about everything in the information management world within state government. The state entities need to be held accountable for how they treat the public’s information and resources.

Techwire: What do you read to stay abreast of developments in the gov tech sector? Do you have an IT mentor?

Childs: I continue to read publications on the future of technology in the driving space, specifically autonomous vehicle literature. There is vast array of computing and IT infrastructure that goes into handling the dynamic driving tasks humans do each day. We all make more decisions on the commute home than you will during an entire day at the office. Another publication I read is the American Association of Motor Vehicles Administrators’ MOVE Magazine, which keeps me updated on the current and future trends among driving regulation and innovation. I also use research partnerships to make the right decisions to stay ahead of change in the IT space.

I have leaned heavily on several IT “mentors” who have assisted me in my transition to CIO. One of my IT mentors is my predecessor, Scott Howland, who continues to help me learn in this new role. When I need help navigating the SIMM or the rest of the IT world, I reach out to Marcie Kahbody, deputy secretary and agency information officer for the California State Transportation Agency. Another great resource for me has been Amy Tong, state chief information officer and California Department of Technology director.

Techwire: Can you tell us a little about you personally? Do you have a family? Hobbies? What was the last book you read?

Childs: I have been married to my beautiful wife, Lorinda, for 28 years, and we have two sons. Our oldest has a degree in computer information technology with an emphasis in cybersecurity and is working toward his MBA at California State University, Sacramento. Our youngest is a transfer junior who started at the University of California, Davis, this fall, pursuing combined majors in computer science and computer engineering.

My hobbies include fishing and playing golf. I also speak fluent French and love to cook.

The last book I read was Outliers: The Story of Success by Malcolm Gladwell.

Editor’s note: This interview has been lightly edited for style and brevity.