Gov. Jerry Brown on Thursday signed a bill that requires a complete rebuild of Cal-Access into what supporters say will be a database where campaign contributions and lobbying expenditures are quick and easy to access.
Sep 30, 2016 / By Samantha Young 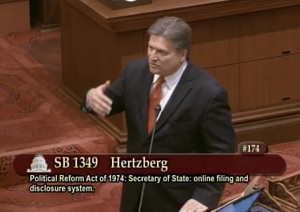 California’s clunky, hard-to-search campaign and lobbying database is slated for an upgrade.

Gov. Jerry Brown on Thursday signed a bill that requires a complete rebuild of Cal-Access into what supporters say will be a database where campaign contributions and lobbying expenditures are quick and easy to access.

"This legislation helps put California’s government where it should be — at the forefront of using technology to provide transparency," bill author Bob Hertzberg said in a news release after the governor signed the bill.

Unlike other major IT projects, however, the implementation of the new system won’t be overseen by the Department of Technology. That’s because the bill includes a provision sought by Hertzberg to exempt the Cal-Access upgrade from the state’s Stage Gate process.

Hertzberg successfully persuaded lawmakers to give the Secretary of State the independence to run the project, citing the urgency for a new online database and the need to avoid time delays that could occur with approvals from another state entity. CalTech has very strict procedures in place for large IT projects in an effort to mitigate risks, steps recently implemented after a string of high-profile IT project failures in recent years.

Instead, the Secretary of State’s office will be required to submit reports to the Legislature about the project, which lawmakers said must be complete by Feb. 1, 2019. However, the Secretary of State may extend that date to Dec. 31, 2019, after consultation with the Assembly Committee on Elections and Redistricting and the Senate Committee on Elections and Constitutional Amendments.

The bill is a win for campaign finance advocates who have long complained the online Cal-Access database is outdated, unreliable and difficult for the public to access the information they need. The online portal on the Secretary of State’s website is intended to show who is contributing campaign money, receiving campaign money and how it is being spent. It also lists lobbyists, who hired them and how they are being paid.

The bill directs the Secretary of State to create a data-driven database that adheres to prevailing standards for search and open data. It also calls for a system compatible with local campaign finance data and allows for the easy download of data.

Among the features called for is a unique ID that will be assigned to donors who contribute more than $10,000 so the public can see how much money a single contributor has given in an election cycle — something that is difficult to do today.

The Legislature earlier this year included $1.8 million in the 2015-16 budget for the project. This bill gives now gives the Secretary of State’s office the authorization to move ahead with upgrade.