In a conversation with Techwire about his early candidacy, John Chiang says he wants to improve transparency of government spending and give the public more detailed data on expenditures. California still has much room to improve, observers say.
Jun 15, 2016 / By Samantha Young 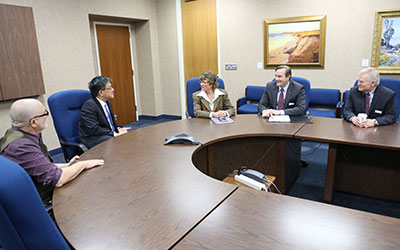 A decade ago, when State Treasurer John Chiang was chair of the Board of Equalization, he promoted a one-step website intended to help Californians learn when and how to pay their taxes on time.

He described the initiative as part of his goal to expand and improve electronic services in a way that would help Californians in their everyday lives. The message is similar to the one Chiang carries into his 2018 gubernatorial bid where he faces another tech savvy candidate in Lt. Gov. Gavin Newsom.

“We have created a new sense of expectancy about transparency and accountability in state finances, and California’s investors expect it from us,” Chiang told Techwire in an interview to discuss his early candidacy.

In speeches and interviews over the years, Chiang has described transparency as a top priority because providing government financial information enables Californians to hold local and state officials accountable. He notes how the citizens of Vallejo and Stockton were “blindsided” when their cities went bankrupt because “citizens didn’t know what was happening.”

Chiang boasts a lineup of award-winning open data projects that shed light into government salaries, pensions and debt. As state controller, he helped return $3 billion worth of unclaimed property by launching an online application process.

His team at the State Treasurer’s Office is currently working on a one-stop portal called C-BIG where businesses can search for available economic incentives in one place.

“We’re transforming how government services are being provided, and we want this to be a model for the state,” Chiang said about his most recent project.

But Chiang’s reluctance as state controller to share detailed state expenditures to private vendors is a black mark on the candidate’s transparency record, critics say.

California repeatedly receives a failing grade in an annual transparency report published by U.S. Public Interest Research Group Education Fund. This year, the state ranked the lowest out of 50 states for providing information about state expenditures on contracts with private companies.

“It’s so clear, every other state made improvements, and California is just really far behind,” said Emily Rusch, executive director of CALPIRG and CALPIRG Education Fund. “I definitely think there is a lack of political will.”

Chiang defends his decision not to release detailed expenditures, saying it wasn’t available for him to provide and such data will be easy to find after the completion of the FI$Cal project, which is intended to create a centralized financial platform for the state and streamline 2,500 legacy financial systems used across more than 120 departments.

In reaction to a Los Angeles Times report that the governor and legislature had agreed to scale back the transparency promised under FI$Cal, Chiang told Techwire he was disappointed in the decision.

"Lack of transparency is the breeding ground for corruption, abusive spending, and public distrust, Chiang said in a statement. "I urge the Governor and lawmakers to reconsider their decision to water down commitments that were made years ago and that are necessary for a functional democracy.”

Although the expenditure language was struck from the budget deal, H.D. Palmer, spokesman at the Department of Finance, said Wednesday that FI$Cal will now have more flexibility to include a broader set of data, including state expenditures.

If elected governor, Chiang said he envisions even greater transparency on public spending – providing detailed information online that shows, for example, how many dollars from public bond money was used to hire workers or buy pipe on a specific construction project.

“Eventually what I would like to see, if we can make it happen, is how we’re using people’s dollars,” Chiang said. “This is a big dream.”

A look at the transparency websites created under Chiang’s leadership:

This story was updated Wednesday to reflect additional comment from Chiang and the Department of Finance about the FI$Cal system.