4 Steps to Leading with Radical Openness During Tumultuous Times

There's a lot of noise right now. How is your department working with citizens to create clarity?
Jul 7 / Contributed by Direct Technology 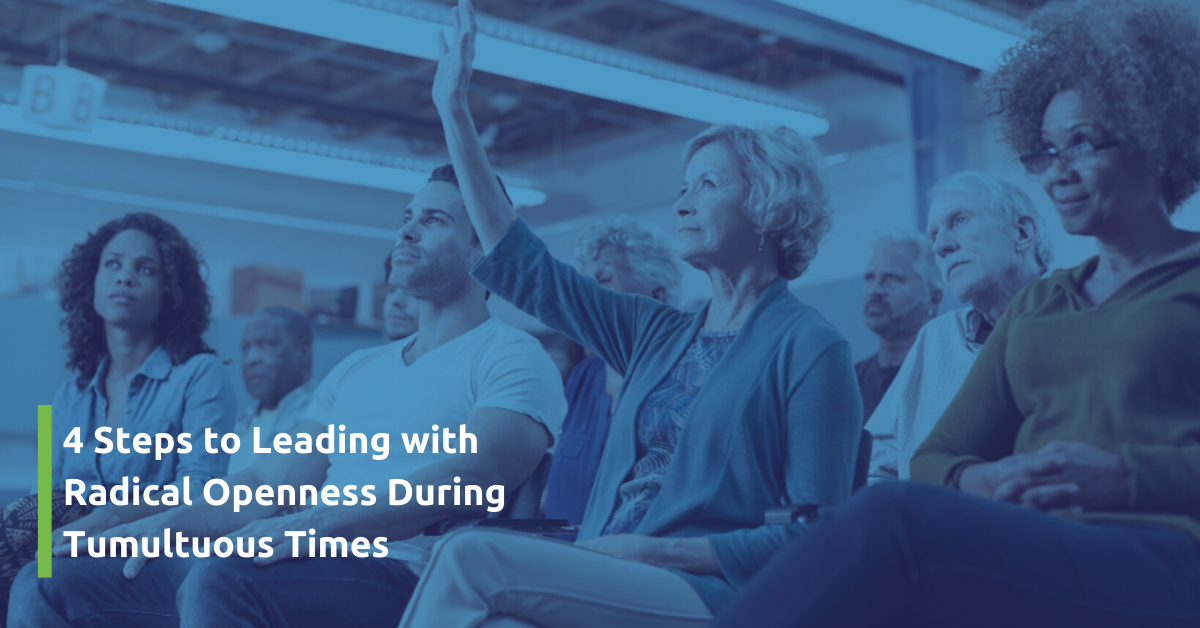 It’s a presidential election year; politicians, healthcare professionals, scientists, and economists are working to mitigate pandemic fallout; protestors have lined streets around the world in the name of racial equity. There is potential for enormous change in the coming months, depending on how government leaders throughout the nation respond to the massive amounts of feedback they’re getting.

Salim Ismail declared Radical Openness a key trait of an exponential leader (that is, one dedicated to using innovative thinking to create step change in their organization). He wrote that “while many leaders and their organizations ignore most of the criticism and suggestions [from within and beyond], creating an open channel to the crowd…and the mechanisms to determine signal from noise can provide new perspectives and solutions, allowing access to whole new layers of innovation.”

At this moment, many government officials are understandably overwhelmed by criticism and suggestions, as Ismail said, from within and beyond. How can you determine what feedback will inform decisions that bring about positive exponential transformation, and what’s just noise? How can you create a constructive channel of new perspectives, solutions, and innovations?

In short: How, exactly, should you go about instilling Radical Openness into your agency?

The key: From within and beyond. Change begins inside your organization with a citizen-first approach, then accelerates by incorporating people and processes from the private sector in your project plans. Here’s how to move through those changes into exponential innovation.

In our first article on Accelerating Exponential Growth, we asked the question: “How does a government agency (often grappling with tight budgets, aging infrastructure, and competing citizen and political priorities) move through modernization to acceleration?”

The answer lay within the six characteristics of exponential leadership (from Ismail’s Exponential Organizations):

Catch up on the whole series HERE.

Reading through the missions and visions of California’s governing bodies, it’s clear that leaders from CalTrans to CDT value transparency, fiscal stewardship, sustainability, accountability, and efficiency. Despite those stated priorities, many people feel like their voice goes unheard. So how can exponential leaders change that perception into a transparent, responsive, proactive reality?

There’s a lot of talk about getting more citizen voices in government—but the truth is, every voice in the public sector already is! Government officials are citizens first, public servants second. Regardless of the administration you work under, you maintain your own beliefs, values, fears, hopes, concerns, and goals. That means that government leaders already have a pool of feedback they can tap into—and the best ones will do so deliberately, candidly, and without defensiveness.

After all, when citizens feel they aren’t being put first, there are consequences. Those range from voting out leaders viewed as ineffective, to peacefully protesting for civil rights, to, well, dumping 342 chests of tea into the Boston Harbor and launching a war of independence. Clearly, ensuring your constituents’ needs and desires are met is extremely important.

So start your Radical Openness work within yourself, your team, and your department. Cultivate an atmosphere within the office that ensures your staff feel comfortable airing process issues, giving and getting constructive feedback, and bringing new ideas to the teleconference table. Partner with them to bring barriers to transparency into the open, and ask for input. Work with your colleagues to ideate and visualize solutions to break down those barriers—as citizens, not a governing body. (Would an approachable and informative, but often funny, approach work for you like it does the Lawrence, KS Police Department?)

Of course, declaring road conditions “axis of evil”-worthy isn’t the only way to improve citizen engagement—it’s just a great reminder to look for creative solutions. Figure out what makes sense for your organization, whether that’s increased face time with customers, more accessible phone lines and websites for a diverse clientele, or something else.

Then, it’s time to put philosophy into action and partner with citizens in the pursuit of exponential growth. How? One great way: Leverage the speed, agility, and technology investment of private-sector companies for public-sector projects.

In 2011, NASA brought its Space Shuttle program to a close after 30 years—and paved the way for private-sector contribution to space exploration. Huge overhead to maintain legacy tech and lack of funding for new shuttles led NASA to invite commercial firms to work on getting astronauts to and from the ISS. NASA’s Commercial Crew Program was brought to life to achieve “safe, reliable, and cost-effective access” to and from the ISS and low-Earth orbit, awarding contracts to the likes of SpaceX and Boeing for space taxi services.

What a radical idea, putting something as complex and delicate as American space travel into the hands of private tech companies. There was serious debate around the nation about whether private companies would be able to meet NASA standards. Yet SpaceX became the first private company to send a spacecraft to the ISS, in May 2012, and has had a series of successful launches dating to as recently as June 13th. And while the average Space Shuttle launch cost $450 million, a SpaceX launch costs just $57 million. Cost-effective, indeed.

By being receptive to feedback from Americans regarding the distribution of federal funds, and perspectives and solutions from private companies that sought to join the modern space race, the government is now able to spend less than 1/8 of what it used to cost to go to space.

Of course, the government has long partnered with private companies to offload the cost of developing vital goods and services and tech innovations. In fiscal 2018, the federal government spent $559 billion on contracts. Now, as the pandemic rages on, agencies will be expected to tighten their belts and hold off on nonessential projects until it’s clear that the economy is recovering. But working with private companies has enabled and empowered the government to track, fight, and mitigate effects of COVID-19:

Telework solutions, supply-chain solutions, healthcare and sanitation solutions… Private companies (and private citizens) have pivoted tech and services dramatically to combat one of the largest-scale and most sudden crises of our time. From open-source 3D-printed ventilators to contactless shopping and more, radical openness to unusual tech ideas is making progress against the pandemic—and public entities that are receptive to these ideas and transparent about their use are the ones that will reap the benefits of citizen trust, community health and economic stimulation, and technological advancement within their organization.

“If we could do more to bring the innovative practices in the culture of the private sector into government, we could serve our citizens a lot better.” – CA Assemblymember Kevin Kiley

Even outside of a crisis, partnerships between public and private sector offer a channel to receive valuable citizen input, involve rapidly evolving tech, and move toward the reality of transparent, responsive, proactive government that exponential leaders are working hard to realize. Key to adopting the culture of the private sector: Operating with a customer-first, feedback-oriented project lifecycle.

For instance, during former Chief of OTech Davood Ghods’s senate confirmation hearing, he spoke of his constituents as customers—people whom he owed a valuable, enjoyable experience. The hearing committee commended him for a “refreshing” outlook and promising direction for the State. In his current role as VP of Direct Technology’s Government Solutions Group, Ghods continues to advocate for improved customer experience in government tech—and thinks the current administration is heading in the right direction with its emphasis on transparency and collaboration.

So, that brings us back to the original question: How can your agency embrace Radical Openness with a citizen-first, private-sector-style approach, so that you can accomplish bigger projects, faster, with greater approval? Here’s how.

Consider each of your audiences: the public officials who implement solutions and the citizens who benefit from them. Each audience has its own pain points, and no two states, cities, departments, teams, or people are alike. So look at customer experience as a learning experience and tune your ears to listen constructively, so you understand what your citizens are asking for, what solutions they’re offering, and how to shift priorities to meet those needs.

Once you have an idea of what your citizens need, involve them in the process of bringing about change. People who feel engaged in civic projects can be an amazing help to getting them completed, from organizing influential grassroots movements to conducting research to fundraising.

As an example: When the City of Redmond, WA, hired us to design a new city website, the major emphasis and imperative of the contract was UX research and requirements gathering around the city, over the course of months, to determine what the diverse residents of Redmond wanted, needed, and found intuitive in the burgeoning website. By working with residents continuously throughout the project, the City was able to devise a design that would truly serve its citizens first.

So think about how you can involve your citizens in upcoming projects in an accessible, engaging, and effective way—and how you can check in repeatedly as you refine and move forward with the SOW.

A natural extension to open planning with your customers is keeping them informed throughout the project. People tend to work with you and give you the benefit of the doubt as long as you communicate with them. That said, it can be difficult to be radically open when a project hits a snag, or it feels like there’s not much to update people on, or when your team is incredibly busy and doesn’t have enough time to adequately engage with the public.

Build a more transparent process into your project plan by considering how you’ll keep citizens in the loop on project progress (and how they can help), how you’ll address and mitigate dissenting opinions and concerns, and how you’ll communicate delays and problems. It might seem like overkill, but think about the unexpected commotion of the last few months. Unplanned challenges can come on quickly and turn timelines, budgets, and workflows upside down. A crisis communications plan that clearly delineates a centralized point of contact, two or three stages of escalation, and consistent messaging for your agency’s response across all platforms could prove vital to salvaging and completing your projects during unexpected upheaval. (If you don’t have a crisis communications plan, Direct Technology can help you build one.)

Above all else, encourage citizen feedback—and incorporate it. Maintain open channels for people to reach out, categorize criticism and suggestions, and release statements that let people know they’ve been heard. And as you plan your next projects, consider how you can use the feedback to improve your process and results. This is how you’ll build trust, transparency, and trajectory in your community.

Radical Openness isn’t something that comes up during the business requirements stage of a project and then goes away. To achieve far-reaching, exponential growth, it must be courageously welcomed, fastidiously maintained, boldly expanded, and made endemic to your organization.

As you start creating a culture of Radical Openness and beginning new civic projects, use Direct Technology’s Radical Openness Checklist (download HERE) and ensure you’re on your way to reaping the benefits of citizen creativity, technology, and innovation. And most importantly, show your customers that you’re putting the human side of tech first.

By Direct Technology
Direct Technology is command central for a host of software solutions and services operating under specific business units including ESG, Government Solutions, and IT Services.